We reached Melbourne after a one night stay on Phillip Island. I created a map to show how much we’ve traveled and it doesn’t seem like that much even though we’ve logged about 800 miles on the car. The problem with traveling this distance in Australia is the roads are often two lanes with speed limits set to under 100 km/hr (60 mph). In the U.S. we have similar speed limits, but a lot of American citizens don’t follow these limits as well as the Australians. I think what has happened here is the use of speed cameras and strict police enforcement has scared the Australians to stay at or below the posted speed limits. It’s a good thing I’m not in such a rush!

Melbourne was a much nicer town than what we experienced in Canberra. The main part of town was easily transversed by foot, and there was plenty to see along the way. This city had a lot of preserved Victorian Architecture from it’s heyday during the gold rush in the 1800s. Luckily, the city planners didn’t demolish all of these old buildings to replace them with something modern. 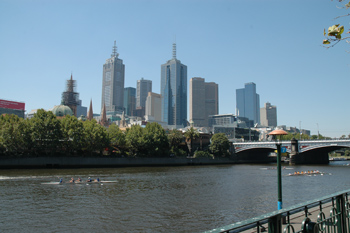 If I were to make comparisons, Melbourne definitely had a grittier feel to it compared to Sydney, and felt a lot more like New York City. Sydney had a Southern California feel to it, and could be the Los Angeles of the Southern Hemisphere. Sydneysiders wore sandals and shorts, while we found a lot more urban wear on the streets of Melbourne with black being a more common color. 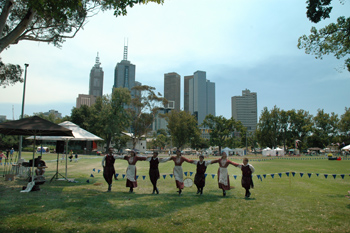 We were in Melbourne for Australia Day, the 26th of January, which marked the landing of the First Fleet in Sydney Harbour. Although it celebrates the beginning of White Australian History on the continent, Australia tries to celebrate all the cultures that make up this country.

Our stay in Melbourne was short because we’ll be back for the Australian Grand Prix in April. The next part of our trip will be along the Great Ocean Road between Melbourne and Adelaide. Speaking of Adelaide, I’m looking for some assistance. Is there anyone reading this website in or around Adelaide, or knows someone who might be able to help me? Please E-mail me so I can ask a favor. Thanks!