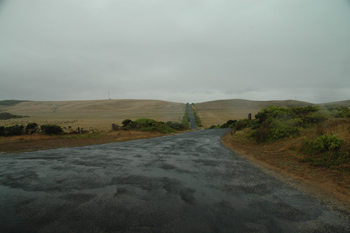 We spent a night in a town called Warrnmabool. It, like many towns in Australia have names that are anglicized from Aboriginal Names. From Warrnmabool the Princes Highway took us inland through grazing fields for cows and sheep. 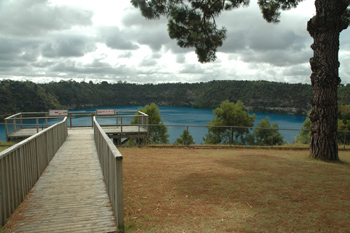 Our next stop was Mount Gambier in South Australia. In the Australian accent, it’s pronounced “Mount Gambiah.” This town of about 20,000 is built on the foot of an extinct volcano. The crater is filled with water and is called the “Blue Lake” because of the color it takes in the summer months. 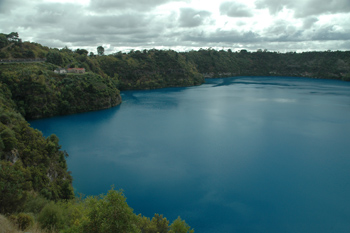 Without any Photoshop doctoring, this is how blue the water was! In March, the water mysteriously fades to a grey color, and does not return to this blue color until the following Summer. This lake supplies the town with its drinking water, so there is no access to the lake. 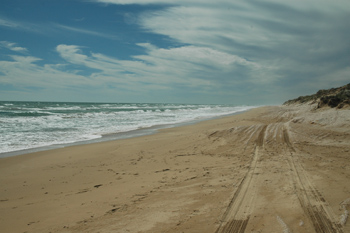 After Mount Gambier, we drove on towards an area called the Coorong. It is a long stretch of sand bar that protects a salt lake from the sea. There are only a few access points to the ocean beach, and many of them are for 4 wheel drive only. We crossed at 42 mile crossing, and walked about a kilometer over sand dunes to reach the beach. The walk was well worth it to see such a long wind blown coast facing the southern ocean. Straight off this coast due South is Antarctica, and the cool temperatures prove it. Southern Australia has cold ocean waters year round, so the beaches are not as popular as the east coast beaches with surfers and families, but it’s still has some beautiful scenery. I almost wished I had my 4X4 truck and an air compressor to explore some more of this desolate place. 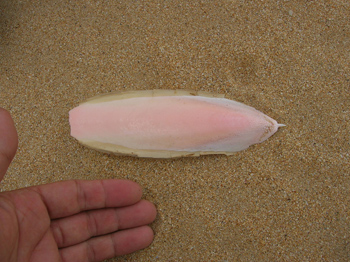 Ever since we landed in Australia, I’ve been spotting these things on the beach, and SA is no exception. The one pictured is about average size, but I’ve seen larger ones. This one has a slight pink tinge on one side, but most of the ones I’ve seen have been completely bleached white. There seems to be a short spar on one end of it, and thin fins on the sides. 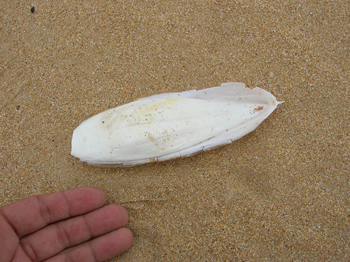 They are very light and seem to be some kind of bone. It’s not as hard as a sand dollar, but pretty close.

I’m asking if anyone out there can identify this thing to me? Whenever I see things like this, I wish I had a naturalist along with us on this trip as there are so many things in Australia that we’ve never seen before!