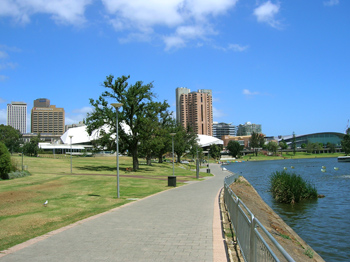 Adelaide has been a pleasant town to relax for a few days. Its population is just a little over a million, so it doesn’t have the hustle and bustle of a big city. We walked along the banks of the Torrens River that separates the main part of the city to the south from North Adelaide. 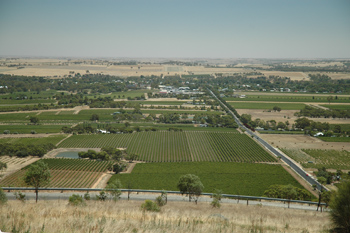 We also toured the Barossa Valley an hour outside of town. It is the world famous wine growing region in Australia, and we couldn’t miss visiting the area being so close to the city. Touring wineries these days with a two year old is pretty much out of the question, but we at least had a nice lunch in the area.

Our main goal in Adelaide was to regroup for the next leg of our trip. Flights needed to be booked, along with hotels and car rentals. Without the distractions of a major city, but still having good facilities, Adelaide was perfect as a launching point. The usual shopping malls and large office buildings exist, but the outback is never far away. I felt this town was the last major place before vast plains of desert and scrub brush existed in three directions.

The plan is to spend the next 6 weeks traveling by air to the destinations too far to drive. Adelaide to Alice Springs is almost 1000 miles, and it’s over 2000 miles west to Perth. I would drive these distances if there was something to see in between, but keeping a two year old occupied, let alone two adults for all those miles is better left to jet travel. From Perth, the plan is to fly to New Zealand for three weeks and eventually return to Adelaide at the end of March to pick up the Falcon and head back to Melbourne for the GP. It sounds pretty complicated, but I’m making this all up as we go along!

Tomorrow, we leave for the “Red Center” in the Northern Territory. The main attraction is Uluru, or the White Australian name of Ayers Rock. It is the largest monolith in the world and it is literally in the middle of nowhere. It seems absurd that we are flying 2 hours and then driving for another 5 hours to see a large rock, but half a million people do it every year. I’m hoping they all weren’t be misled! I don’t know when I’ll have internet access again, but I’ll speak to you all soon!