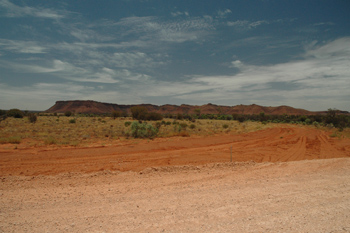 We left Uluru and headed for Kings Canyon, about 300 kilometers away via a circuitous paved road. It’s probably only about 100 km as a crow flies, but the terrain is pretty rough, especially with a 2 wheel drive sedan! 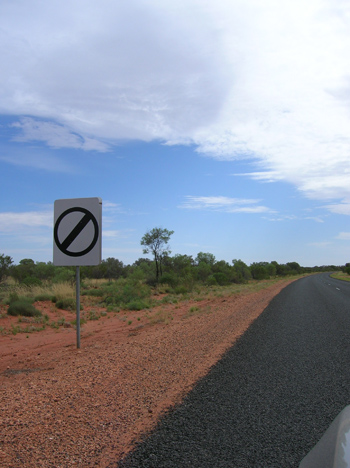 photo D Byer
The good news was that 200 km of this black top road had NO SPEED LIMITS!! In the Northern Territories, unlimited speed limits are common on stretches of straight highways. It’s fairly safe, but the highways are two laned, the shoulders are often unpaved, and the edges often drop off abruptly. After my wife took this picture for me and then promptly fell fast asleep, I managed to reach an indicated 195 kph which is a little faster than 120 mph. Super high speeds on public roads do not thrill me anymore, but a comfortable 140-150 kph (about 90mph)was fine for me. It certainly kept me more alert and awake than the 100kph you find in the rest of the country! 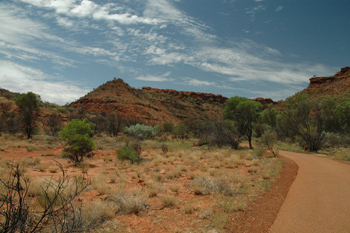 After about three hours of driving, we arrived at Kings Canyon. I’ve heard some Australians mention that it is the Grand Canyon of Australia, but what we saw was a little disappointing. It’s not that it wasn’t a pretty landscape, but it was a long way to travel to see something of this scale. 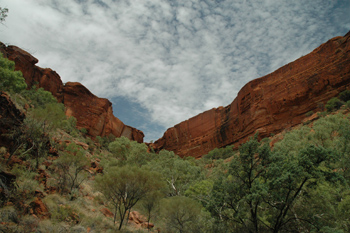 The escarpments were much smaller than even the Blue Mountains in New South Wales, at least they were a short drive outside of Sydney! We found ourselves three hours away from Uluru, and five hours from Alice Springs, with not much else to see. 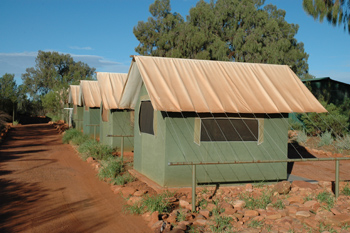 We decided to spend the night 30 km outside of Kings Canyon at a place called Kings Creek Station. There was a resort type place within the park, but it was owned by the same people that owned the Uluru Resort. Our private protest was not to spend money with them anymore (more on this later), so we checked into Kings Creek. 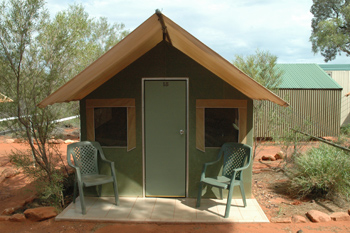 When we found out the accommodations were canvas tents on permanent platforms, we were a little hesitant. We stayed in something similar when we were in Kenya 10 years ago, but those were a little better appointed. 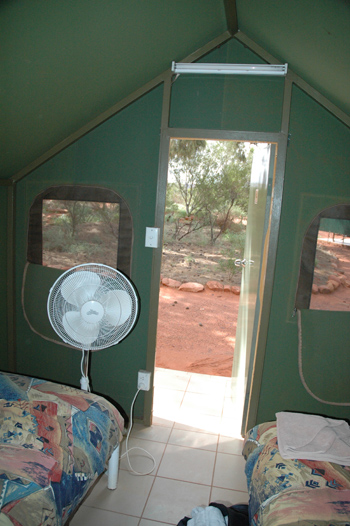 There was no air conditioning, and the daytime temps were well in the 90s if not over 100 degrees F. By the evening when we settled in, however, the temperature began to fall and we were spared the intense heat. With the windows all unzipped, the inside temperature fell quickly. The restaurant prepared a nice barbecue package for us to grill on the camp barbecue, and we washed it all down with some cold beers. Our fears were gone, and we actually had a very pleasant evening. The baby fell right to sleep, and my wife and I sat outside looking at the stars in the Outback. We realized of the two months we’ve been in Australia, this was the first night we sat under the stars. It has either been too cold, or raining all the other times. I hope our luck turns for the rest of the trip!