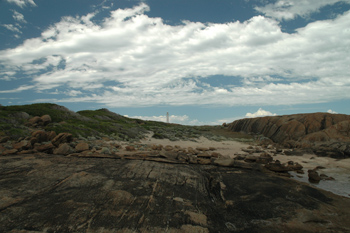 We spent most of the day in the car traveling from Margaret River to Walpole with a stop in Augusta. Augusta is the last town on the west coast of Australia. It is also where the Indian Ocean meets the Southern Ocean, and a lighthouse was built to warn of this corner of Australia. The shore is mostly rocky with short breaks of sandy beach. 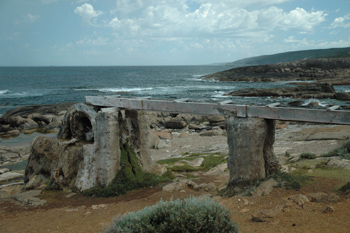 One of the attractions is this 100 year old calcified water wheel. It was originally built to supply the builders of the lighthouse with fresh water for the mortar to cement the bricks together. Through the years the minerals in the water collected on the wheel and eventually froze it in place. 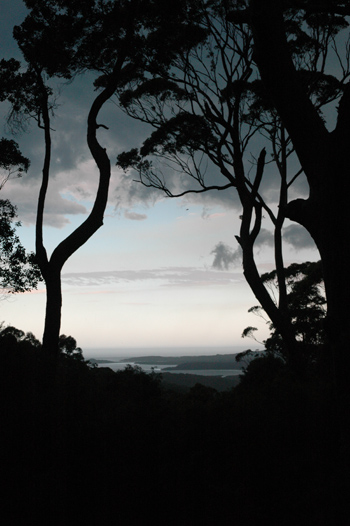 We stayed in Augusta just long enough to take a few pictures and get some fuel. The journey to Walpole would be through a national forest, which would be a welcome treat considering Perth was experiencing a record high of 100 degrees F. today! Luckily for us, thunderstorms formed along the southern coast, and rain chased us all the way eastward. The only disconcerting thing were the lightning strikes. This is bush fire season, and fires often start from lightning. Local public service announcements instruct citizens to pack a “Go kit” so they can flee their homes from approaching bush fires. As we drove through the forest, we found some valleys smoldering from perhaps a recent lightning strike. Further down the road, we actually found smoking brush right along side the road! We were soon met with oncoming fire fighting trucks, so I assumed we would be warned if things got worse. Soon my fears were alleviated when a torrential downpour flooded the forest with rain, probably putting any small fire out in the woods. We were happy to  arrive in Walpole safely.

Speaking of roads, I’ve been enjoying myself on the back roads of Western Australia. In the Margaret River Area, parallel to highway 10 is a road called Caves Road. It runs a couple hundred kilometers of twisty back road where I only wish I had something better to drive! The speed limit is about 70 mph, but going just a bit faster makes the road more interesting. I rented another Magna, but it’s still been fun to drive.

Australians are very safety conscious, and the government has convinced the population that speed kills, however, I’ve found the soft shoulders on the roads perhaps more dangerous. Many of the roads here are two lane roads with an abrupt drop off into a gravel or dirt shoulder, and if you put a wheel off on the side of the road, it’s very easy to slide out of control. Combine the soft shoulder with lack of attention from slow speed limits, and you can easily get into a bad crash. I’d be curious to see the statistics on the kind of accidents on Australian roads, and how many are due to loosing control on the soft shoulders.