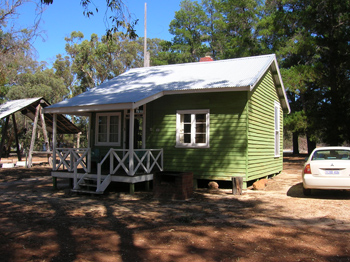 From Albany, we headed up towards Perth via the Albany Highway. This route took us through Western Australia’s Wheat Belt and some quiet farm land. We stayed just outside the town of Narrogin in a National Forest in a restored woodcutter’s cabin. It was a nice change to be in the middle of the woods instead of by the ocean where there was always more people. In the evenings we would sit outside watching dozens of kangaroos coming out to feed.

One of the attractions of the area was an area called Barna Mia, a reserve for indigenous marsupials. When Australia was settled by Europeans, some brought with them animals from home to introduce into the wild for food and sometimes sport. Rabbits and foxes were set free for hunting purposes, but soon dominated over the local wildlife that just couldn’t compete for the sparse food. Cats were then introduced to try to control some of the rabbit population, but they also ate the locals! The indigenous animals were threatened to extinction until wildlife conservationists stepped in to help. Barna Mia has built two large fenced enclosures, one measuring over 20 hectares, to breed the native animals, and start releasing them back into the wilds of Australia. A trapping and poisoning program runs in conjunction to this rehabilitation, helping these animals regain their natural home. 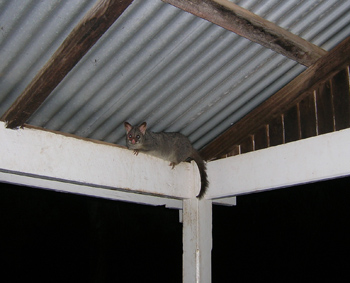 The tour of one of the enclosures at Barna Mia was a night when the nocturnal animals came out to feed, so we couldn’t take any pictures of the animals, but I did manage to find two Brushtail Possums climbing on our porch when we got home that night!

With a couple of days to relax, I had some time to reflect on some of the things I’ve learned about Australia, and what I miss about the U.S.. Here are some miscellaneous thoughts and observations: 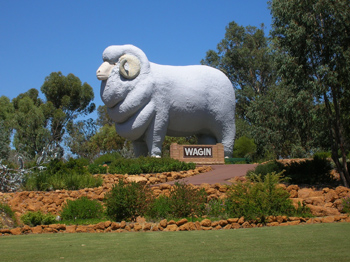 Much like the U.S., Australains like building big “things.” So far, we’ve seen big rams, lobsters, and rocking horses. I’m sure there are more, but if we set out to see them all, we would have a different trip!

Australians seem to like canned beets, and slices of the red vegetable turn up often in sandwiches and hamburgers. “Sauce” is ketchup and usually accompanies the beets. “Chips,” our french fries, come with almost any version of hot “take away” food. A holdover from the British, the Australians love their fish and chips, and I am amazed with the amount of chips that come with every order!

I tried Vegimite. It is very salty and should be spread thin on buttered toast. It’s color and consistency is much like dark caramel. I actually liked it, but I can see how it can be an acquired taste.

Cappuccinos are popular, and if you want a coffee with milk, the closest thing is called a “flat white” which is what I’ve always known as a cafe latte. Cappuccino machines are in every shop and deli, but brewed coffee is nonexistent.

Alcohol is bought from “bottle shops,” and some supermarkets, but not in most convenience stores. For a country perceived to be largely beer drinkers, I’m amazed how expensive the beer is. Even the common domestic stuff like Victoria Bitter (VB) or Carlton Lager is almost twice as expensive for a case of similar beer in the States. A case of 24 cans is known as a “slab” in Australia. No one drinks Fosters.

Wine is very popular, and we’ve been having some fantastic local wines. We’ve also discovered “cask wines.” These wines come in two or 4 liter boxes, and although lower in quality compared to conventional bottled wine, it has been very convenient for our travels. Inside the box is a sealed mylar bladder with a spigot, allowing us a glass of red wine wherever we are. (Traveling with a toddler, we look forward to a drink after she goes to bed!) The two liter casks have shown to be a little better than the bulk 4 liter containers. We’ll usually pay bout $10-12 USD for a t 2 liter box. It beats worrying about how to keep the beer cold! 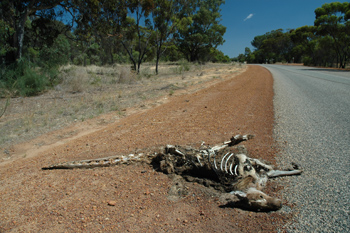 Kangaroos are not all over the place, but are definitely the dominant type of road kill. They come out mostly in the evenings and are a hazard to cars much like the Deer in the U.S. Many Australians have installed large bars to the front of their cars called “roos bars” to protect them from the marsupials, but hitting one at high speed can be dangerous no matter what is mounted on the front of the car!

The sun is very strong everywhere you go in Australia. Skin cancer cases is probably the highest than anywhere else in the world. The government has a campaign to remind Aussies to protect themselves from the harmful rays by saying “Slip, Slop, Slap:” Slip on a shirt, Slop on some sunscreen, and Slap on a Hat! I hope they listen!