Heading South on the South Island

3/6/06
Heading South on the South Island 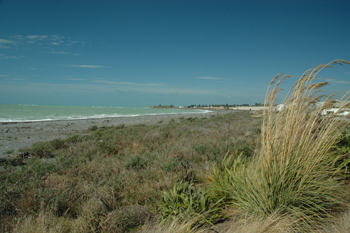 After spending a night in Ashburton, a small town about 90km south of Christchurch, we continued south along Highway 1 to Timaru. The highway took us inland through some flat farm country. Mountain ranges could be seen in the distance to our west, but we’ll explore more of those on our trip back up the South Island of New Zealand. Timaru was an industrial town focused on shipping and farming, but there was a main street catering to the tourists. Since we hadn’t seen the beach since Akaroa, we looked for a nice beach to take a walk. The woman at the tourist information center directed us to a beach walk just outside of town, but described it as “shingley.” 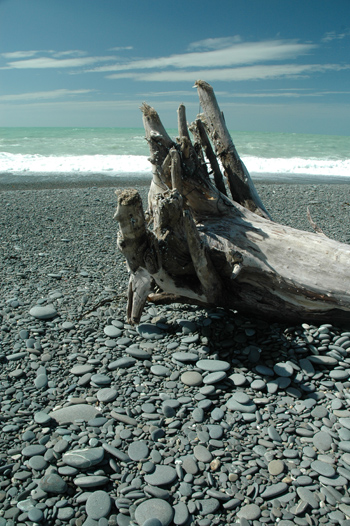 As we walked onto the beach, we discovered it to be covered with round stones. The waves had sorted them to size order, so the smaller ones were down by the water’s edge. The water was literally sea-foam green, but it was way too cold to even dip a foot into the water. A brisk wind was blowing, and even with long pants and fleece jackets, we were freezing! We all retreated to the warmth of the car, and proceeded south. 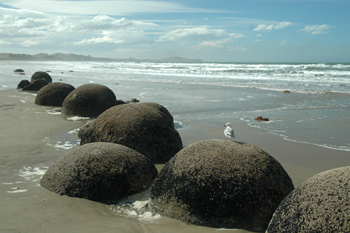 About 90 minutes down the road, we came to a place marked “Moeraki Boulders.” An arrow pointed down the beach path that led to these interesting rock formations. They are large spherical boulders sitting in the sand on the beach. 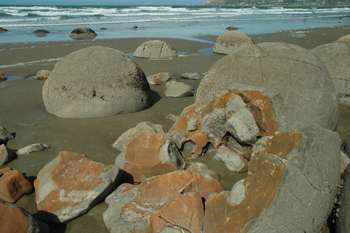 Some of them have split open from years of pounding surf, and their insides reveal an orange colored rock. An exhibit I saw the day after in the Dunedin Museum described them as, “Concretions that have grown from a crystallizing process within mudstone.” It’s a good thing my daughter didn’t ask me how these things were formed that day on the beach because I would have never guessed! 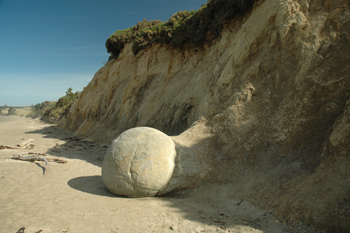 What was neat was there were a few more boulders were embedded in the bluff by the beach. Who knows how many more of these things were still in the ground, or under the sand? 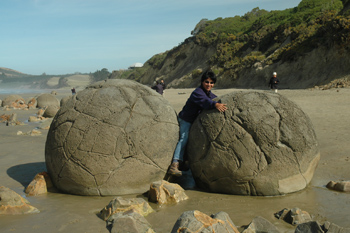 Before we left, I had my wife take this silly touristy picture for me. Make up your own obscene caption.