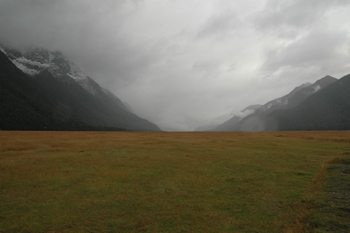 We left our motel room at 8:30 am for the two hour drive north to Milford Sound. We bought a CD that was made especially for this drive and it told us about the sights we would see along the way and a brief history of the area. It was available at the visitor’s center, and made the drive a little more interesting. 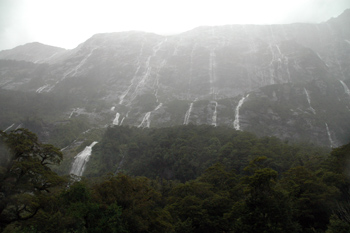 It was raining as we left Te Anau, and it only got worse as we drove along the valley to Milford Sound. The heavy rain made waterfalls out of all the walls along the fiord. It was an amazing amount of water falling from the sky and down the mountainside. 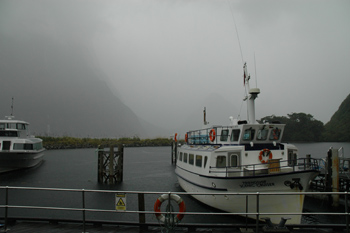 We arrived in Milford Sound for our scheduled boat ride out into the fiord. Milford Sound was incorrectly named a sound as it is technically a fiord. Sounds are bodies of water that offer protection from the sea, while a fiord is formed by glaciers when it carves its way between mountains. Although Milford Sound offers shelter from the Tasman Sea, it was still formed by a glacier millions of years ago. 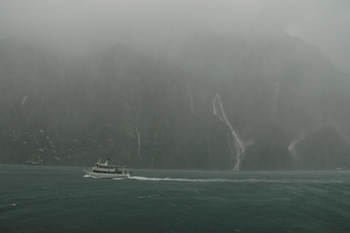 There are several boats offering trips though the fiord. The only other way to explore the fiord is on foot, and by the amount of rain that was falling, I’m glad we chose to go by boat! 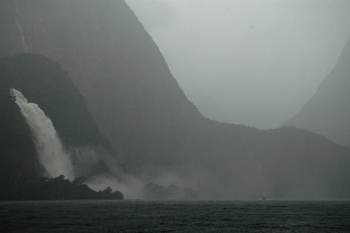 Although we were surrounded by hundreds of waterfalls because of the rain, there are a couple of permanent falls that empty into Milford Sound. This one is just outside of the port. You can just make out another tour boat on the right side of the picture. 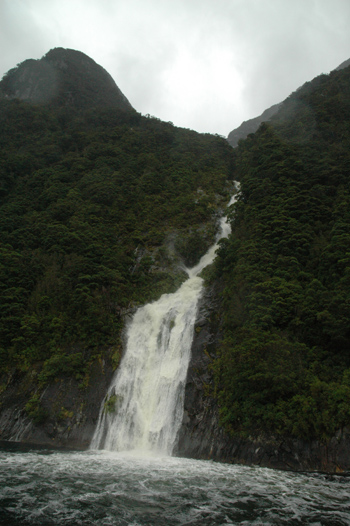 The area gets from 6-8 meters of rain a year. Yes, that’s 18-24 feet of rain a year, so you can imagine it’s usually raining. The water comes from the Tasman Sea and western winds that rise in the face of New Zealand’s western mountains. As the moist air is forced upwards, the water is released into the western side of the South Island. Almost every forecast I heard had the quote, “Rain today with strong westerlies.” 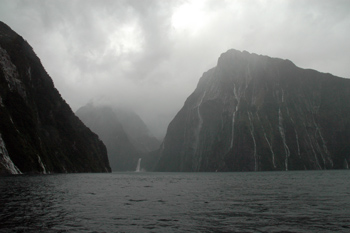 As we continued out into the Tasman Sea, we were rewarded with more and more stunning scenery. We were also punished with more wind and rain, so only the dedicated sightseers stayed outside on deck to take pictures. 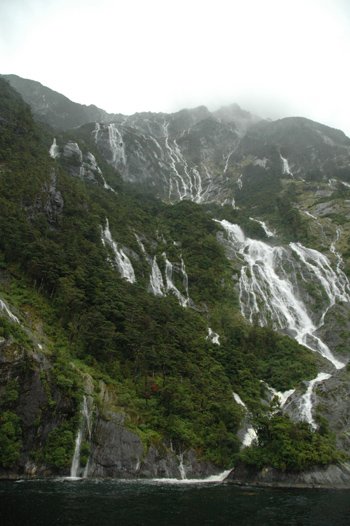 With the inordinate amount of rain this area gets and the extraordinarily deep water in this fiord, interesting sea life survives below. The tannins in the runoff shields light from deeper water which also stays saltier than the surface water that remains relatively fresh. This boundary layer gives fish and plant life below a chance to thrive in shallower water than normally found. Deep sea organisms live all along the fiord because the conditions are very similar to being much further out to sea. 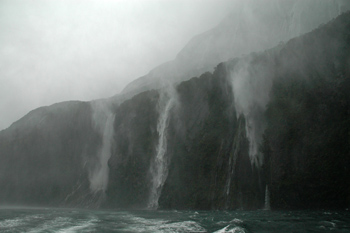 As we approached the mouth of the Milford Sound, we were met face to face with the strong westerlies of the Tasman Sea. Gusts were reaching 60kph, and the swells were reaching 2 meters. You can see the water from these falls being blown away by the wind! 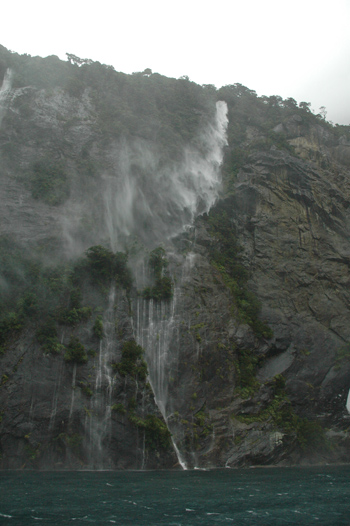 The wind and the rain got to be too much for our camera, and it stopped working! We were trying our best to keep it dry, but with driving rain, it was not easy. In the digital age, when a camera stops working, there is nothing that can be done. 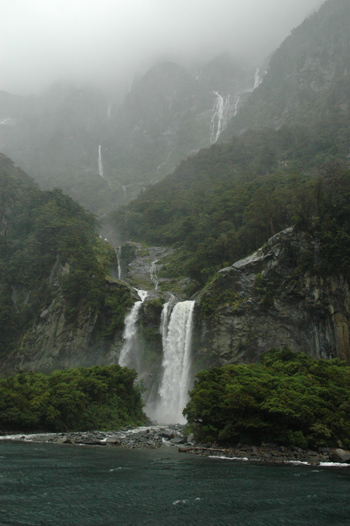 This was one of the last shots I took with our Nikon D-70 before it died. I tried changing batteries and resetting the system, but nothing would bring it back. Even after a night in a warm motel room didn’t bring any signs of improvement.  Luckily, I brought a small point and shoot digital as a back up, but the pictures from it are not nearly as nice. With another 3 months of traveling left to do, we’re faced with buying another digital SLR since we won’t be anywhere long enough to get the first one fixed!