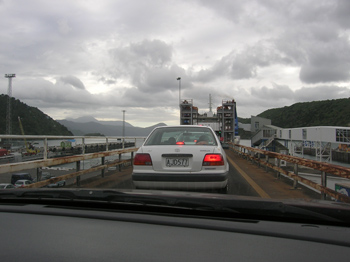 We awoke “early o’clock” to pack and load our car on the Interislander Ferry in Picton headed for Wellington. We waited on the dock for about an hour before being loaded onto the ship. The large trucks went first, and the cars filled in the rest of the space. I was glad the weather was calm because a couple of weeks ago, this same trip which normally takes 3 hours took twice as long to get to port because of bad weather. Cars were damaged when a truck broke free in the rough seas and toppled over in the hold. I don’t sail very well, so I was hoping for an uneventful trip.

We arrived in Wellington on time and unruffled. My cousin Victor, who lives in Wellington, met us at the ferry slip and guided us to our hotel. Wellington is the capital of New Zealand with about half a million people, but it’s recent claim to fame is its home to a film production company called WETA. Everyone in New Zealand knows this hometown company that created the films like The Lord of the Rings Trilogy and recent Oscar winning film “Kong.” Peter Jackson and his team of talented filmmakers have created an industry from scratch in this New Zealand town that is considered one of the best in the world. A by product of these films has been the boost in tourism to New Zealand. After seeing the Lord of the Rings, everyone wanted to see where it was shot. Both the North and South Islands are dotted with former film locations, and tourists come from all over the world to see “Middle Earth.”

My cousin works for WETA as an animator so we got a tour of his facilities. He was part of the team of animators that worked on Kong, and shared a small bit of glory with the recent Academy Award to WETA Digital. After signing non-disclosure statements (no pictures), we were allowed into the building to see Victor’s workplace. We peeked in on portions of future movies being made at computer workstations, and saw how the early stages of computer animation took place.

After our visit to WETA, we had a very important matter to take care of: replacing our Nikon D-70. Since it stopped working a few days ago from getting too wet, I’ve tried everyday to see if by some miracle it would turn on again. Since it was only rain water, I was hoping once the moisture was gone, it might work again, but we had no such luck. For now, until I can get it back to the States for repairs, it will be ballast for my suitcase. All the towns we were in since the camera died have been too small to sell Nikon digital SLRs, so Wellington was our first hope in finding a replacement. I was half tempted to switch to a Canon EOS, but the cheapest way to get back in action was to buy a D70 body, while still utilizing our old lens and filters.

Hard goods in Australia and New Zealand are expensive. We’ve noticed books, camping gear, and now cameras to be 10-40% more expensive that what we can buy in the States. It was killing me to buy another D70, but these days, my wife and I say in unison whenever we are forced to spend money, “It is what it is!” I think the camera store saw the quickest sale of a D70s ever. The whole transaction took less than five minutes, and I was $1024 USD poorer!