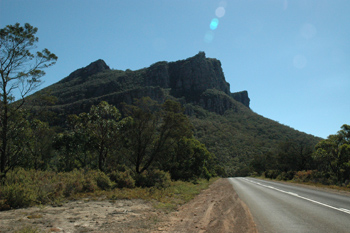 We arrived in Adelaide from New Zealand and headed out for the Grampians. We were on our way back to Melbourne for the Australian Grand Prix, and since we took the southern route along the Great Ocean Road, we stayed inland on the way back. The Grampians are a very old mountain range that rises out of the flat lands of Victoria Australia. Although not as spectacular as the New Zealand Mountains, Australia is pretty flat so it was a nice change to see something rising out of the horizon. 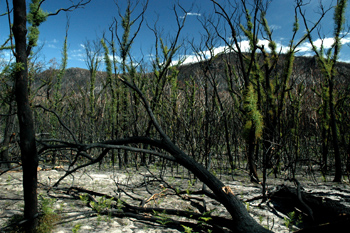 In January while we were due south on the Victorian Coast a fire raged in this area. A few deaths were attibuted to the fires that burned thousands of hectacres of bushland and forest. 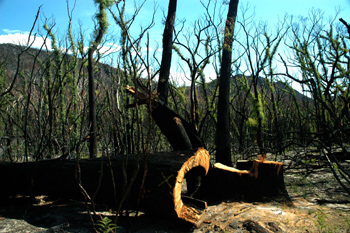 The Grampains were directly in the path of these fires, and as we drove to Hall’s Gap, we saw the devatation. The low mountians in the background were all burned away and everything along the road was scorched for miles. The forest service had already begun cutting down some of the dead trees to keep them from falling onto the road. 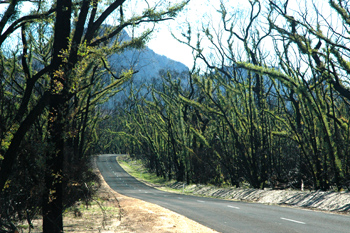 What impressed us was the amount of regrowth already seen in the burned areas. The blackend trees that originally looked dead were showing plenty of signs of life with green sprouts all along its branches. These trees have evolved through millions of years with the ability to survive the intense heat of bushfires and quickly regrow new leaves. All this growth was just after two months after the fire. 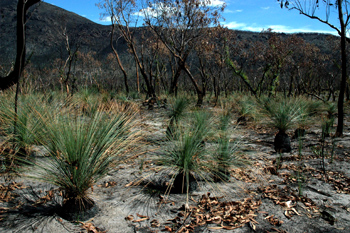 Another plant that resists bushfires are thes Grass Trees. Older Australians know these as “Black Boys” but in a more politically correct time, Australia renamed these plants. They are said to live for hundreds of years, and I’ve seen these plants grow to six feet and higher when we were in Western Australia. The fires burn off the outside leaves quickly, but the stumps easily survive to grow new tops. 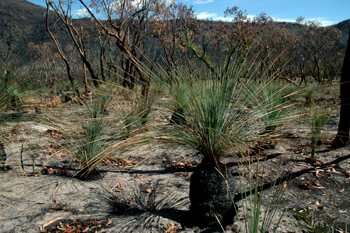 If it woeren’t for all the scorched earth, these plants look healthy and normal again. 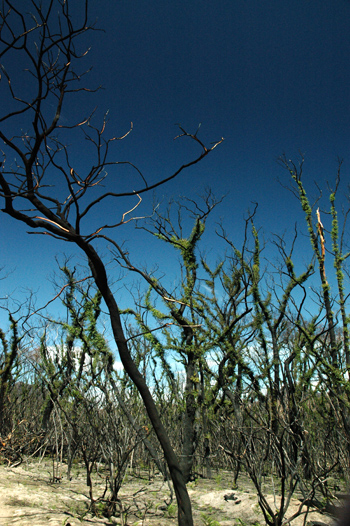 As we told some people we were heading towards the Grampions, we were diswaded from going to an area that was so devasted by the recent fires, but we found the landscape even more interesting! We were in awe of destruction, and were humbled by the power of an Australian Bush Fire.