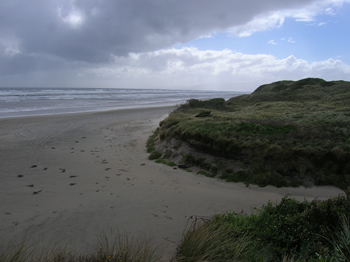 After a couple of days in Stanley, we moved down the west coast of Tasmania to Strahan. It’s pronounced with one syllable. 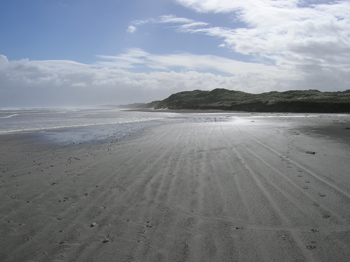 Although you wouldn’t know it from my pictures, it rained A LOT during our stay. Along with rain, there were strong winds as well. When we tried to walk on the beach, we were battered with 40-50mph winds. The sun would shine like it did in this picture for one minute, and the next minute it would be raining sideways.

Much like New Zealand, Tasmania is in the latitudes of the “Roaring Forties,” so the weather can be unpredictable. Whenever the term “strong southerlies” was used in the weather forecast, I learned to prepare for some blustery cold rainy weather! 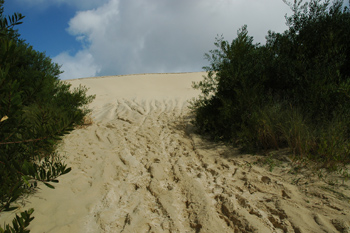 Another stop outside of Strahan was the Henty Dunes. With the wet weather, I was able to climb the damp sand to the top of these dunes a little easier, but it was still pretty hard going. 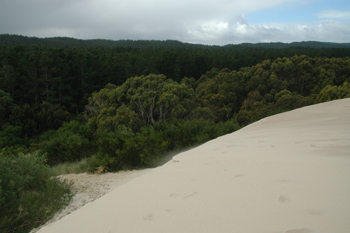 Sand has collected here for many years at the base of this forest on the edge of the ocean beach. Local 4X4 tours take people on these dunes for rides. 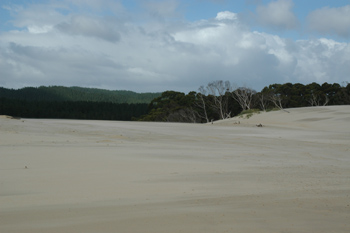 The dunes stretch on for quite a while, and I had to make sure I followed my tracks in the sand back to the car before they were obliterated from the strong winds. 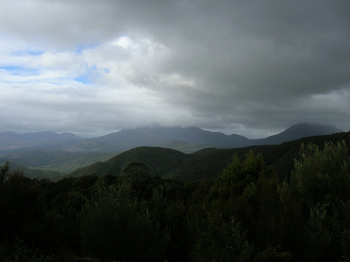 On the way to Queenstown, we tried to see some of the local mountain ranges. Unfortunately, it was still pretty cloudy, so the peaks were usually obscured by clouds. 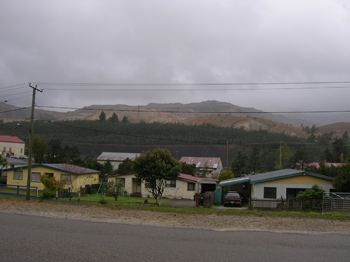 Queenstown is a mining town, and it has a river that has the reputation as perhaps the most polluted river in Australia. After over a hundred years of mining, the run-off from the strip mining has leached many heavy metals into the local streams and rivers. As you drive into town, you can see the bare eroded mountain sides all around the town. 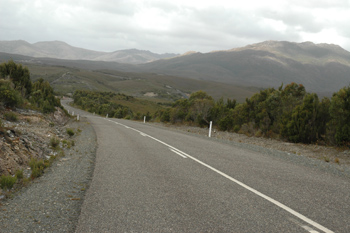 In the other direction out of Strahan, was a little road out of Zeehan. A Melburnian Ferrari owner told me about this great driving road that sees very little traffic. It was constructed many years ago to build a hydroelectric dam following a mountain river to the construction site. Since it’s a loop road that is easily bypassed on the main highway, the traffic on this road is pretty sparse, so you can imagine the fun this road can be for a Ferrari owner! 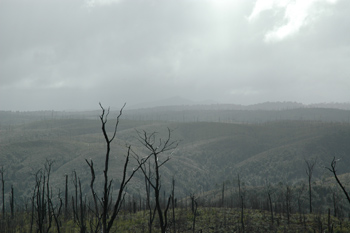 The scenery is interesting with signs of an old bush fire on one section. The road is the perfect combination of high speed straights and curvy mountain passes. 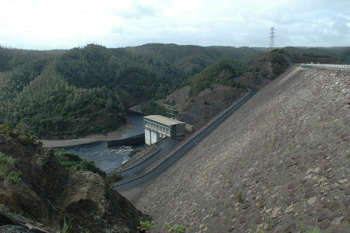 I wasn’t able to do the whole road, and turned back when I got to the dam, but it probably was just as well, since I was driving this wonderful road in our Falcon! 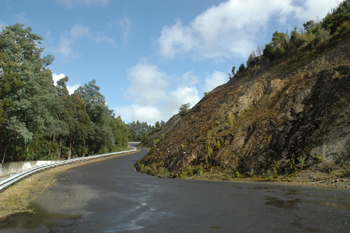 According to the map, it went on like this for another 60 miles. Promise to keep this road a secret, and by all means, give David plenty of room when he comes the other way in his 365!