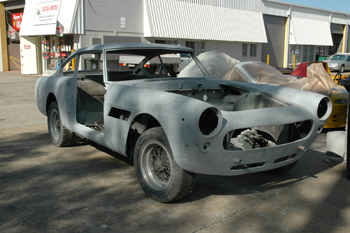 I stopped by a shop in a southwest suburb of Brisbane to see a Ferrari 250GTE getting some bodywork. The car belongs to Andrew Brent, who lives north of the city. The story about Andrew’s car in California is in the Owner’s Gallery. 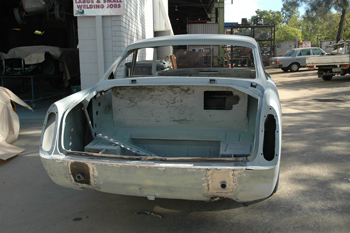 After bringing the car back to Australia, Andrew had decided to restore the car to her former glory with a bare metal respray, and full mechanical rebuild. The small shop that is doing the metalwork and paint is making progress after a year’s stay. The car was relatively rust free, but the rear valence was repaired with some of the trunk opening. 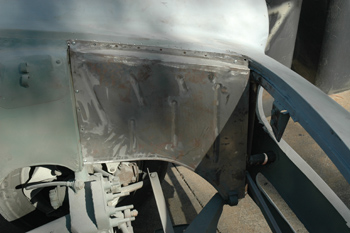 The most damage was fixing an old repair from a front end collison. New panels were fabricated and will be welded into place and some structural tubing was replaced. 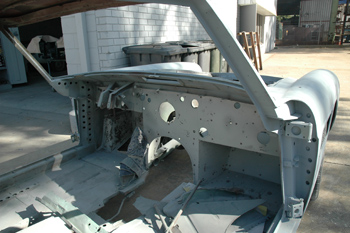 In Australia, cars imported left hand drive after a certain vintage are allowed to remain left hand drive, so Andrew is keeping this car original, but other modifications are still required for this car to register it for Australian roads. Three point harness points had to be welded into place for all four seats along with the manditory child seat safety restraints found in many modern cars built after 1995! Even with his kids too big for a child seat, Andrew’s Ferrari will have the provisions for the extra harnessing.

The next step for this car is prep and paint before it is returned to the mechanic Andrew has assigned with the task of the mechanical rebuild. At that point, he’ll be on the lookout for a good upholsterer!