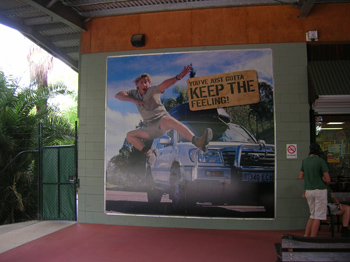 I was asked if I was going to stop by Steve Irwin’s place on the way north from Brisbane, and I wasn’t sure if I should. For those who don’t know Steve Irwin, he’s better known here and in the United States as “The Crocodile Hunter.” In America, he is the host to a show on The Discovery Channel, and was famous in Australia before bringing his Aussie catch phrases like “Crikey” to the States. In the early 70s, his parents opened a reptile park in Beerwa, about an hour north of Brisbane. Their enthusiasm and dedication rubbed off on a young Steve Irwin to take over the family business in the 80s. Steve had a knack for working with the Crocodiles, and  seeing him wrestle with one of these 10 foot reptiles was always part of the attraction to the park. Unfortunately, his worldwide fame has also been a little embarrassing for some Australians. Much like Paul Hogan of “Crocodile Dundee” fame of the 80s, Australians don’t want the world to think of them all as khaki-short-wearing-bush-men that like to wrestle the local wildlife. I felt that visiting Irwin’s place, now called “Australia Zoo” was akin to visiting an over the top Las Vegas casino for a slice of Americana. My friends convinced me that even with the possible “tack factor” it was actually a good zoo and worth taking  a look. 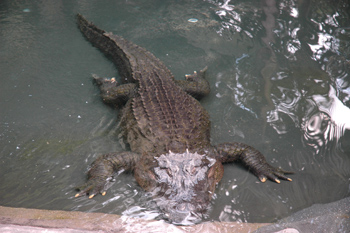 If you wanted to see fresh water crocodiles, american alligators, and saltwater crocs, you came to the right place. Everywhere we looked there were these prehistoric looking creatures lurking under the water watching us. 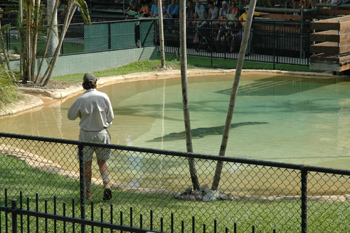 The park had several demonstrations throughout the day featuring many animals in the park, but the main attraction was the crocodile. The Australian crocodile is pretty common in Queensland and every year, there are human fatalities from croc attacks. The staff explained that many of these deaths often occur when alcohol is involved, and reminded us that crocodiles don’t drink! They also showed how easily these animals can move under water without a ripple to be seen on the surface, as in this picture. The ridges and bumps on their backs are designed to cancel the waves of each other so the water is not disturbed by their movements if they stay submerged! As the trainer moved about the pool, this croc would home in on the vibrations of person’s footsteps, which is also how they find their prey at the water’s edge. 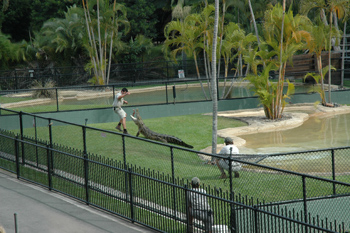 The demonstration gave three rules in staying safe when in crocodile country. First, stay out of the water. Many of the saltwater estuaries in Queesland have crocks waiting to pounce on anything that comes near the water. Second, give yourself plenty of room when walking near a body of water. Crocodiles are large animals, and are fast only for short distances. If you are far enough away from the water when one comes out of the water, you can escape by running away. The third rule,…I can’t remember, but with the knowledge of the first two, I’m not taking any chances by the water in Queensland! 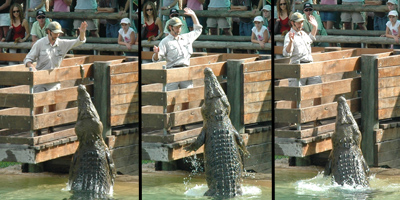 Oh yeah, this picture reminded me of the third rule. Never hang out or climb out over water in a something like a tree branch. Crocodiles can leap pretty far out of the water and pull you in. Once they have a hold of you, they’ll try to drown you. They can hold their breath for hours, and put you in a death spin until you’re out of air. 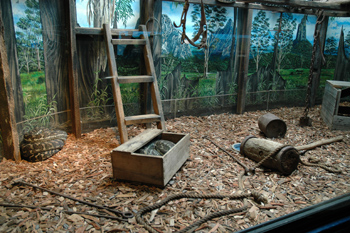 I learned quite a lot about crocodiles during our visit which prepares us for our trip north deep into crocodile country, but I also learned why Steve Irwin is so popular. He and his wife are truly dedicated to the animals in this zoo. The enclosures are large, and well landscaped. The animals are often allowed to roam free and are not kept in small pens for the visitors. Many are moved from their daytime enclosures to sleep in another part of the park, which gives more room to move. Even smaller enclosures are larger than one’s I’ve seen in other zoos and painted with some nice dioramas. It was definitely the nicest zoo we’ve been to in Australia, and I highly recommend you visit if you’re in the Brisbane area. I’m glad I put aside my preconceived notion of Steve Irwin, and had a great time!