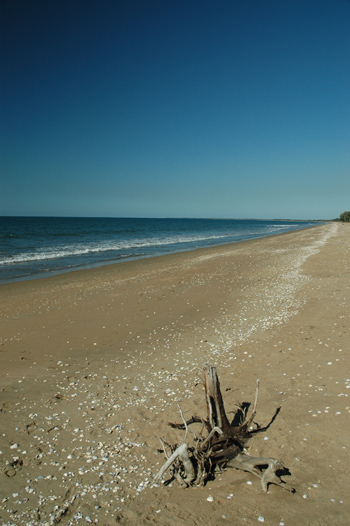 May 1st was a school holiday and with its passing, the vacation season has come to an end and the beaches are now empty. The weather has been perfect with temperatures hovering around 80 in the days with cool nights in the 50s or 60s F. This far north in Queensland experiences two seasons, a wet season and a dry season. The wet season is hot and humid during the summer months with occasional downpours, while the dry season is much what we’re currently having, dry sunny days. Queensland is experiencing a drought and water restrictions are in effect. It’s made even worse by the fact that this area is headed into the dryer part of the year. 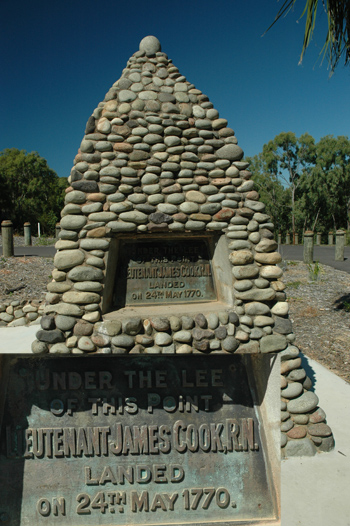 After a two night stay in Bundaberg, we headed north towards Rockhampton, but not before stopping by a town called 1770. It’s name comes from the year Captain Cook landed on its shores. It was one of the few places that a ship could land, as north of here are vast stretches of coral reef ready to hole the side of a wooden ship. 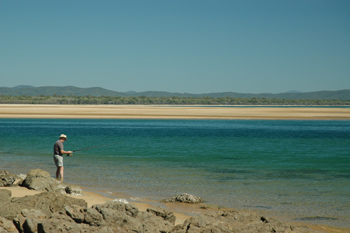 For years the only paved road to 1770 was from the north, but about a year ago, the road from Bundberg was paved, giving easier access from the south. The town has remained small because of the limited access, but we felt the renewed growth from the extra road as we drove through. 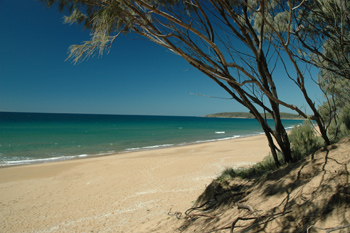 Being in the end of the tourist season, the beaches were deserted and beautiful. There was very little surf because as we head north in Queensland, the Great Barrier Reef begins to form offshore. The reefs absorb the energy of the waves as they come ashore making for small waves. 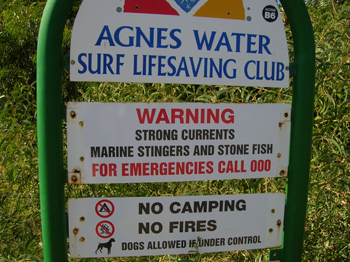 Having small waves does not mean there  weren’t strong currents as we saw from this warning. The sign also warned swimmers about touching jelly fish, and stepping on stone fish, both hazards are equally dangerous. The marine stingers are tiny jelly fish that are hard to see, and yet have a sting so powerful that people who have been stung writhe in pain for days. Some unfortunate swimmers have died from these stings. These Marine Stingers along with the Box Jelly come into these waters half the year until May. Luckily for us, the season is just about over.