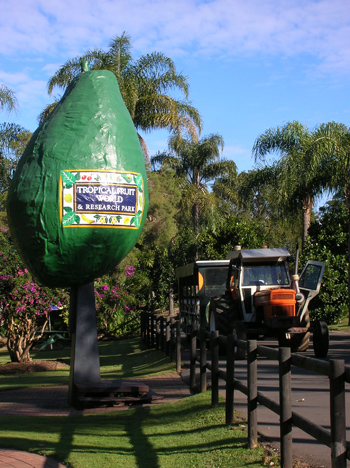 As a parents of two-year-old, we find ourselves in places we would have never been to as a couple a few years ago. Tropical Fruit World on the border of Queensland and New South Wales off the Pacific Coast Highway was one of these places. Attractions that offer playgrounds and animals to feed are the stops we look for to entertain Ellie, but every once in a while the adults find something worthwhile as well!

Tropical Fruit World was started about 30 years ago as an avocado farm, and was open to the public in the 80s as “Avocado World.” The owner was an avid collector of tropical fruits and brought back plants from all over the world to cultivate in this temperate climate of northern NSW. Soon there was much more to see than just Avocados growing on this farm, and in the 90s, the farm was renamed Tropical Fruit World. 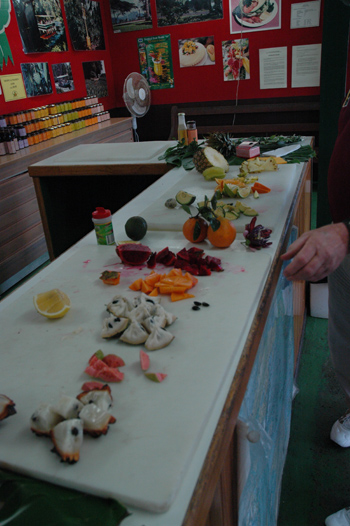 Besides a tour of the farm behind a tractor, there was a tropical fruit tasting that was fantastic. Since our trip into the tropics of Australia, we’ve been trying out the different fruits found in the markets, but learning more about them has been difficult. It was great to try several different fruits never seen before, and to compare them to ones we’ve had. 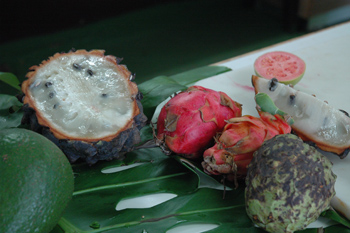 The Rollinia (cut open with the white flesh) was one of these fruits I’ve never had before. It’s Brazil’s version of the custard apple, and its texture has been described as the filling of a lemon meringue pie. It’s flavor is sweet with a slight tart taste when very ripe. Next to it was the dragon fruit. It has a deep red seeded center, and stains worse than beet root! 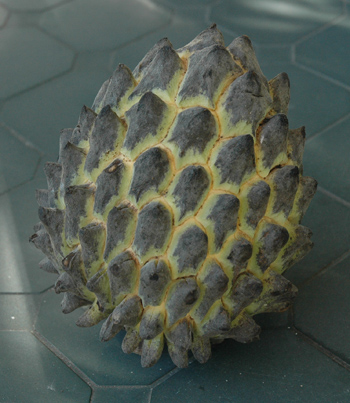 Here’s what the outside of an rollinia looks like. 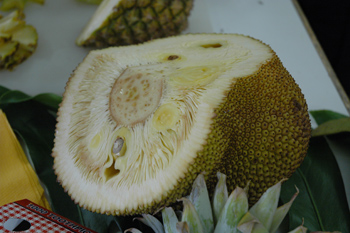 Another fruit that is now on my list of favorites is the Jakfruit. It originates from India, but it is easily grown in Australia. It’s a large fruit growing three times larger than a football. It has a hard outer skin and grows on trees. The insides come in two varieties with crisp and wet interiors. The one we had was the one with crisp fruit. 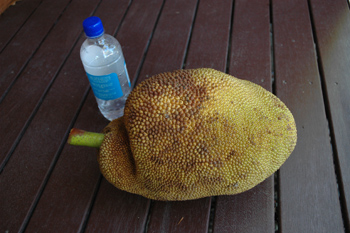 It was so good that we bought one to have the next day. Even the smallest one we picked was over 5 kilos! 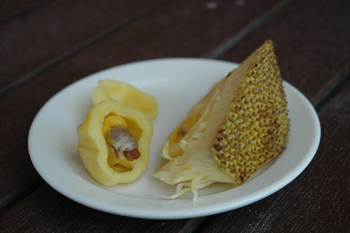 After cutting through the tough skin, the fruit is found as the soft shell surrounding the seeds. The rest of the interior is a fibrous filling that has little taste. The fruit, however, is delicious, tasting like sweet honeydew with the texture of dried apples.