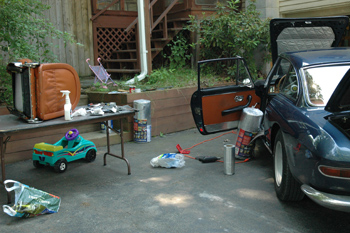 Ten days after my return to the States, I found myself working on a Vintage Ferrari, only it wasn’t my car! A friend of mine in NY owns a 330GT 2+2 which becomes an oven in the summertime. We’ve been meaning to look at his car even before I left for my trip, and I felt Yale has suffered long enough, especially since we’re headed into summer here in NY. My driveway became an impromptu Ferrari workshop sharing space with my kid’s toys. I worked on the car as Yale nervously watched my daughter steer her toys around the Ferrari! 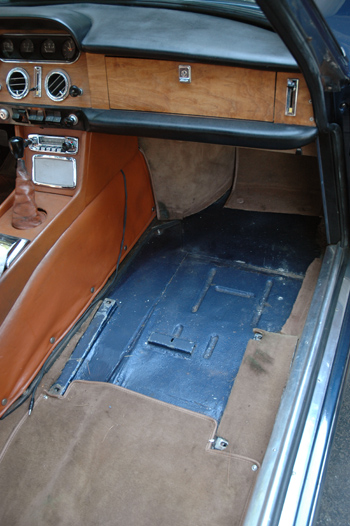 Yale’s car was pretty clean under the carpets. There were signs of previous repairs, but the floors looked pretty solid. I secured a pop rivet while I was in there, but it was all in order. There was actually some insulation under the carpets, but in summer, Yale told me his passenger could not keep their feet in the foot wells from the intense heat. 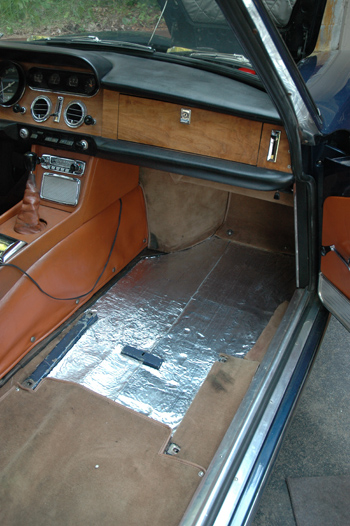 Yale bought two types of insulation, and I chose to use the self adhesive kind I used for my car. It cuts easily, and molds to the shape of the floors. I found the area under the dash to have no insulation. These sections are closest to the exhaust headers, so insulating these areas would help.

After a test drive, I still found the interior of the car to be too hot. I suspected the Ferrari heater cut off valves were not doing their job. Even with the valves closed, I felt heat coming off the heater hoses. I suggested the next step was to hide a modern ball valve somewhere in line of the heater hose and eventually, we’ll fix the problem completely!