Back to the Grille, and Debugging the Mustang

6/22/06
Back the the Grille and Debugging the Mustang 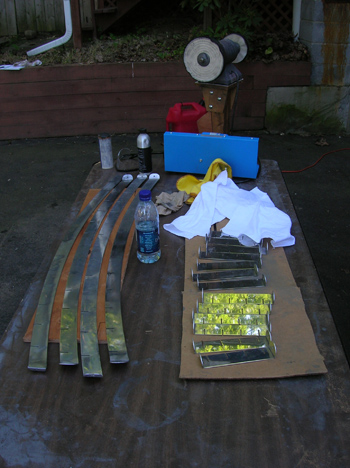 I finally found some time between cutting grass, clearing fallen branches, and unpacking the house, to polish some of my grille. I left off last winter by finishing all the wet sanding so now everything is at the polishing stage. The vertical pieces are basically done, but I’ve only begun initial polishing on the horizontal pieces. 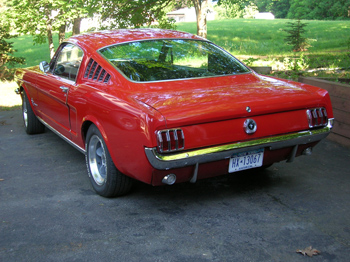 Having been away for six months, I’ve also neglected my other cars, but now with some more time on my hands, I can get my Mustang back on the road. I haven’t had the Mustang on the road for 18 months, and she was overdue for some exercise. She passed her vehicle inspection without a hitch, and was ready for action.

I unfortunately had to attend a wake an hour south of my house, so I decided this would be a good opportunity to drive the Mustang. My friend Art was a car buff, and he would have liked that I went in my old Ford. Before I left the house, I threw some tools in the trunk, but couldn’t imagine working on a car dressed in a fresh white shirt and tie. The drive down went off without a hitch, and the wake was a good as can be expected. When I left the funeral home, I had some difficulty starting the car. I chalked it up to 95 degree heat, and a touch of vapor lock.

As I drove out of town, things got a little worse. She started missing and stumbling as I drove off from a red light. She stalled twice as I tried to decide what to do. I was hoping a plug wire or two had come loose, and it was misfiring, but every time I tried to restart the engine, it became harder and harder. My options were to push on and get on the highway to limp home, or pull over and get my nice white shirt dirty! The decision was made for me as the car was having trouble getting past 50 mph, so I pulled into a convenience store parking lot to take a look. I left the engine running, and popped the hood. I immediately found a loose spark plug and thanked the fact that I packed tools earlier. As I was getting my tools out, the car stalled. After I tightened the spark plug, the engine wouldn’t restart. I checked for fuel, and the accelerator pumps were still spraying, so I narrowed it down to something electrical.

I checked the ignition circuit with a test light, found voltage to the coil, and the points seemed good enough to pass current, but there was no spark at the plug end. As I completely soaked through my shirt with sweat, I decided it would be easier to diagnose this problem in my garage wearing proper work clothes. I called AAA to dispatch a flatbed truck. After a few minutes, they called to inform me that a tow truck was about 90 minutes away! With a truck on its way, I figured I had nothing to loose in trying to find the problem. If the battery went dead from my attempt at restarting the car, a truck would be there to bring me home anyway.

I narrowed down my problem to either the points or the coil. Since I’ve seen points look a lot worse on a Ford, and it still ran, I was pretty sure mine were fine. If the coil went bad, there was nothing I could do, but I decided to check the connection on the negative side of the coil. After exercising the connection, I tried starting her again, and she caught immediately. I was back in business! I called AAA, canceled my appointment with a flat bed, and motored on home. I arrived home proud of diagnosing the problem, and thinking maybe my friend Art was looking out for me today.