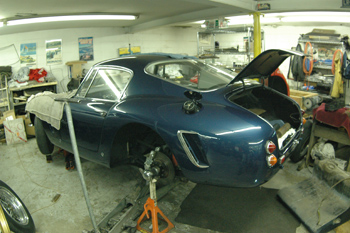 I stopped by Francois’ shop to drop off my transmission. He agreed that something was not right with it when he turned the transmission by hand, and would take a look at it when he had a chance. He was busy draining the gas tank of a 250 SWB, so I decided to lend him a hand. I believe this car was in for new rear suspension bushings, but when Francois filled the gas tank, it began to leak from some unseen location. His only option was to remove the gas tank. 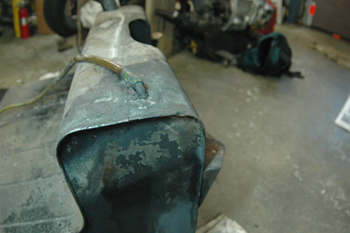 Francois explained that while he was working on the suspension, he noticed the gas tank was missing the spacers at the four mounting points. These were probably left out from some previous restoration. He installed new spacers, and finished the rear suspension. It wasn’t until more gasoline was added to the tank did it start leaking. I worked on my gas tank years ago, and here’s the link to how I made the bushings. 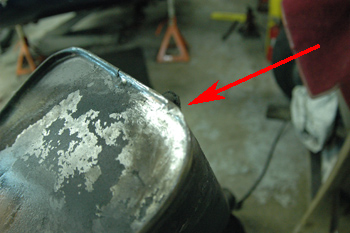 With the tank finally on the ground, we soon found the origin of the leak. There was a small dent on the edge of the tank from where it was hitting against something under the car. Without the correct bushings isolating the tank, the gas tank would move in its mount and hit against the chassis. This spot eventually developed a crack at the soldered joint. Since it was at the top of the tank, it would only leak if the tank was completely filled, but if it left alone, it could have gotten a lot worse. After the seam is resoldered, and the tank reinstalled, this Ferrari can head home!