Source of the Whine 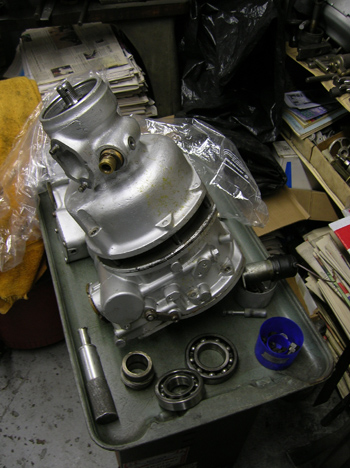 Francois took a look at my transmission and found one bearing, the one we suspected, to be bad. Spinning it in our hands we could feel a few rough spots as the bearing spun in its cage. There are two bearings in the overdrive unit that we did not replace during my restoration, so both of them will be replaced. 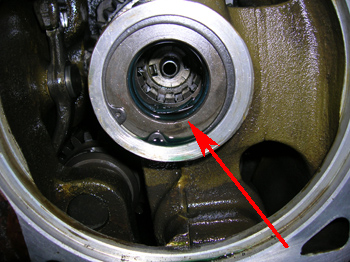 I have to admit that I am to blame for the damaged seal. This website is a testament of all my achievements and failures with this Ferrari, and there is no way I can hide what I have done! When looking back at what I did when the last bits of the transmission was assembled,  I was clearly unsupervised and must have ripped the oil seal when I mated the overdrive with the transmission! Live and learn!

The next decision is what to do with the Overdrive. Last fall, while driving to the Tomyang.net East Coast Party, my overdrive would engage, but after it warmed up and the overdrive was disengaged, it would not re-engage again. An Austin Healey owner advised that it was a simple adjustment on the overdrive, but I would love to be assured that this will work when we put it back in the car. I called Bob Skoog in California from my Supplier’s page to see what he had to say, but his wife informed me that Bob passed away earlier this year. Del Skoog said her husband lost the fight with cancer, but she and a family friend have taken over the service.. Together Lester and Del plan to keep these overdrives alive for the community of Volvos, Austin Healeys, Jaguars, Ferraris, and also in the memory of Bob. Thank you Del and Lester for your dedication!