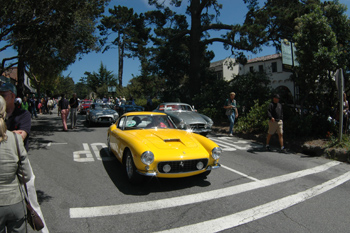 The day began by heading down to Carmel to watch the Pebble Beach Concours entrants drive into town for lunch. It is one of the only chances for the public to see many of the beautiful cars in motion without buying a ticket to the event. 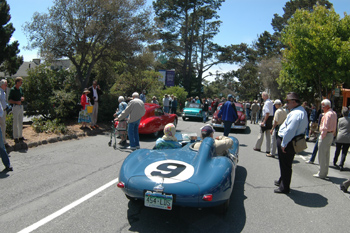 After walking among all the cars, I headed over to Il Fornaio for the Ocean Avenue Motor Club Lunch that Doug and Genie Freedman host for automotive fans from all over the world. The food is fantastic, and the guest list is filled with all the usual suspects in the Vintage Car world. It’s one luncheon I’m honored and excited to attend! Thanks Doug and Genie for your hospitality!

In the afternoon, I had to prepare for another event that was a little less extravagant, the Tomyang.net West Coast Party. The gathering was a BYOB event at the Mariposa Inn’s Breakfast room in Monterey. We may not have had Bruschetta or sauteed sea scallops, but the conversation was just as interesting! With about 20-30 people chatting about Vintage Ferraris, I always wish I could set up microphones to record the conversations I missed in the groups standing next to me!

The party started at 7pm, and I was amazed that we were still hanging in there after 11pm! As we cleaned up, we realized no one had taken any pictures of the party! I was so busy talking and selling t-shirts, that I never pulled my camera out, and Kerry Chesbro was so intent on not spilling any beer (see what happened last year), he didn’t take any pictures either. Either way, it was a good time had by all, and I want to thank everyone who came!