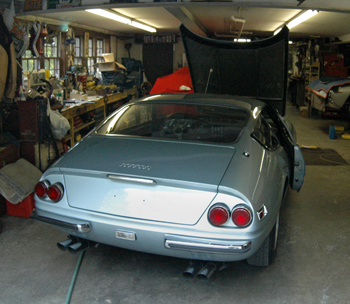 I’ve spent the last couple of days putting this Daytona back together after a bare metal paint job and have had the opportunity to take a close look at her details. Presented to the world in 1968, Ferrari heard mixed feelings about the 365GTB/4 from the critics. Lamborghini created the Miura, and the press wanted to see a mid-engined car from Ferrari. By the time the car made it to the assembly line a couple years later, the Daytona proved to be a fantastically fast and well handling grand touring car ready to compete with any exotic manufacturer. 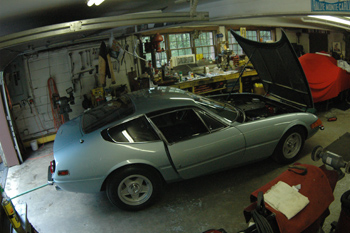 The Pininfarina designed body influenced many cars since it was created. Corvettes, Datsun 240Zs, and Mazda RX-7s have lines that mimic this car. The Daytona, along with the Dino, also marked the shift in design from the Italian coach builder. The rounded lines of the 275GTB, and GTCs were replaced with more angles and creases in the cars of the 70s.

Personally, I’ve always felt the Daytona was the Italian version of the Corvette. It’s full of muscle and shows up anywhere swinging a big stick. My first drive in a Daytona left me shaking. It’s such a fast car, but a handful to drive at low speeds. The hood feels like it goes on forever, and the front corners drop off out out sight making it tricky to place in traffic. On the open road, however, this car comes alive, but I always chicken out well before the car runs out of power. 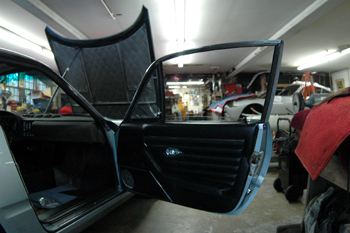 I felt much more relaxed working on a GTB4 than driving one, so I continued on the door panels. After the passenger panel was finished, I worked on the driver’s side door panel. After I screwed in all 9 mounting screws, François noticed a problem with the electric windows. The window was binding in the tracks, and the only way to fix this was to pull the panel off again. The fix was easy, but removing the panel again was a pain in the butt! Before I attached the panel again, we found a problem with the door latch. The cable that attaches to the latch mechanism was slipping and needed an adjustment. Luckily we discovered the problem before I started putting the trim screws back in! 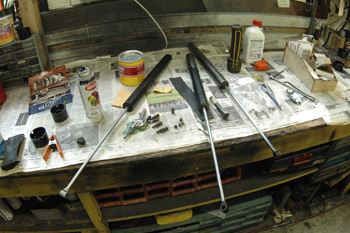 A common problem with Daytonas are weak hood struts. These pressurized gas struts are huge, and often don’t hold enough pressure to hold the large hood open. After getting a set that worked right, I painted both struts to match. We could now set our broom handle/prop rod aside for the next failed hood strut!