400i and Daytona Seats 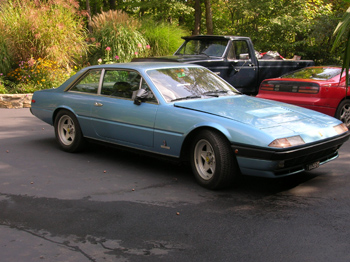 Waiting for me at François’ was a Ferrari 400i Automatic in for some repairs. It is not one of François’ favorite cars to work on as it seems that the longer it sits at his shop, the more things break on it! It came in to have its dash recovered, but had developed some electrical gremlins during its stay. The right rear view mirror also broke off at the the base, and would need to be repaired before returning the car to the customer. Absolutely disgusted with the car, François decided to give me the tasks of fixing this forlorned car.

These cars are truly grand touring machines since the driver no longer has to shift his own gears, but the V-12 engine has plenty of power to hustle her down the road. The thing that scares me on this car, however, is how much more complicated they are compared to the earlier Ferraris. One of the problems I had to fix was the hood release. The 400i has a power hood release mechanism that is operated from a button on the center console and this one stopped working. The two hood releases had two cables that were operated by a solenoid and a back up system of two more cables to manually release the hood in case there was a failure. My question was why have a redundant electrical system when the mechanical system worked fine?! 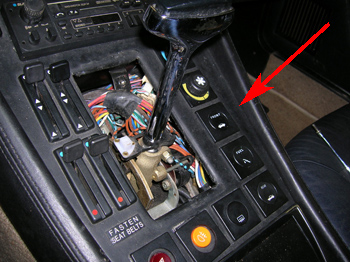 Finding the root of the problem was not too hard, but getting to the switches without taking the whole center console out of the car was! I managed to outsmart the car by taking the shifter plate out to reach the suspect switch (red arrow). With some careful prying and maneuvering, I managed to get the switch out and reseat the plug. It turned out the contacts had gotten corroded, and the relay was not sending power to the solenoid. I got lucky on this one! 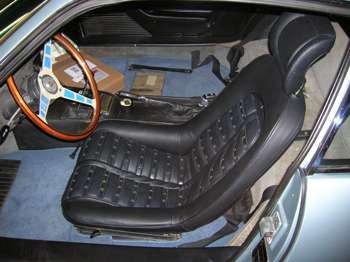 The Daytona came one more step towards completion. Frank, François’ upholsterer finished the driver’s seat, so I installed it in the car. The color combination looks great on this car. The silver paint seems to have a light blue tint that picks up the color of the carpets, and the black seats and door panels makes for a nice contrast.

For those that notice the details, the wood steering wheel is not the original wheel. Frank is recovering the leather wrapped steering wheel and should have it done when the passenger seat gets delivered.