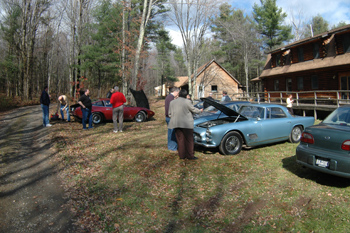 The Second Annual Tomyang.net East Coast was another success with good weather, great friends, food, and cars. Weather in the Northeast is always unpredictable this time of the year, but luck was with us, and the rain stopped the day before. 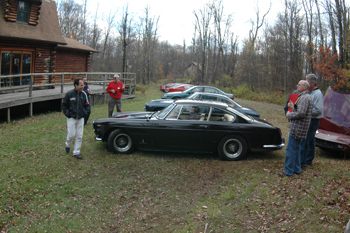 Unfortunately, my 330 America did not make it this year because the transmission is being repaired, but Michael Greenspan’s 330 America came in place of her sister car along with Yale’s Series I 330. Sam brought his recently purchased 365GTC/4 which was a beautiful dark red metallic. 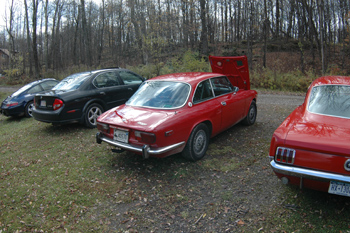 John drove his nice Alfa in from Connecticut to join my old Mustang at Mike Meehan’s house. 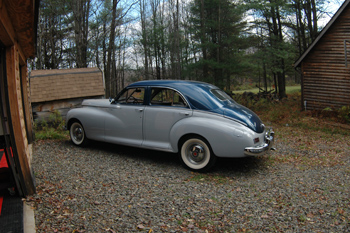 As the interesting cars arrived at Mike’s beautiful home, I asked if it would be O.K. if he moved his Packard off the the four post lift to inspect some of the Italian machinery. The straight eight fired up, and idled with such quiet smoothness, I thought that perhaps I was wrong to take it off the lift so quickly. Hopefully, I’ll get a closer look at this car someday soon! 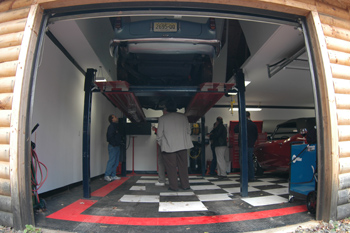 The first car up on the lift was Greg’s Maserati 3500. It was nice to see how another company made their sports cars, and this car was a very clean example of the 3500. The staccato rap of the the straight 6 was a nice contrast the the V-12s parked outside. 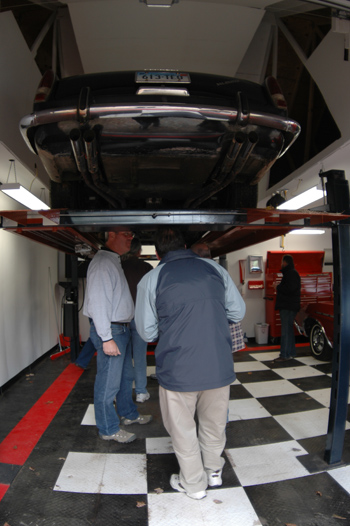 The next car to go up in the air was Michael’s 330 America. This car has not seen a full restoration, so a lot of details on this car was largely original. Unfortunately, the exhaust was showing its age, and some holes were not only seen, but also heard by Dori, Michael’s wife, on the long drive up from Connecticut. 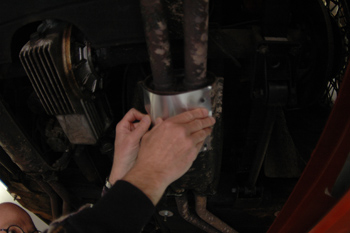 With so many capable hands to remedy the problem, we all pitched in to temporarily patch a hole in a muffler to make the ride home more bearable. With some aluminum roof flashing, sheet metal screws, and some high temp RTV, a cheap repair was made until a new exhaust could be fitted over the winter. Who says Ferraris can’t be fixed cheaply?! 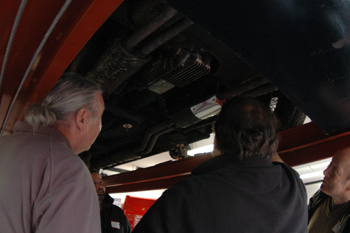 Kerry, Peter, Mike, and Ian stood back and admired their work. During these repairs and car inspections, it was great seeing how many guys were standing under these cars at once! It truly represented the spirit of what tomyang.net is about to me and why we are all friends. 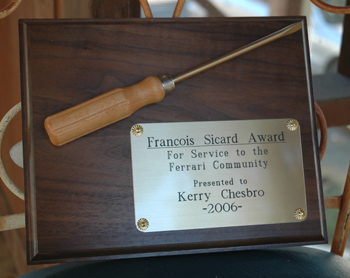 After lunch, we presented Kerry Chesbro with an award that was begun by Yale Evelev last year. It’s dedicated to François Sicard because of his help to Vintage Ferrari owners, and this year’s recipient was Kerry Chesbro. Kerry has created two great websites documenting the work he does on his Vintage Ferrari collection, and a 330 Registry that tracks the history of all the 2+2 330s. He certainly deserved this year’s award.

Parker Hall sent some great southern BBQ for us to add to the wonderful food Mike and Marie served for the party. He also sent a bottle of wine and some Kilimanjaro Designs shirts to raffle off as  door prizes. Someday, we’ll have to convince Parker to come to the East Coast Party to meet some of his East Coast Customers! 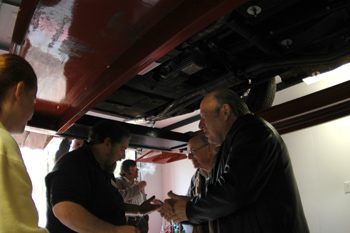 Although Kerry Chesbro came from Seattle and Tom Wilson came from Los Angeles, one guest beat them all for distance by flying across the Atlantic to be with us for the party! I was honored that Ian Levy (pictured right) felt the need to come across the ocean to meet a bunch of strangers that he has only traded e-mails with over the years, but within minutes of shaking hands we realized that we all had a kinship that was only strengthened by meeting in person. 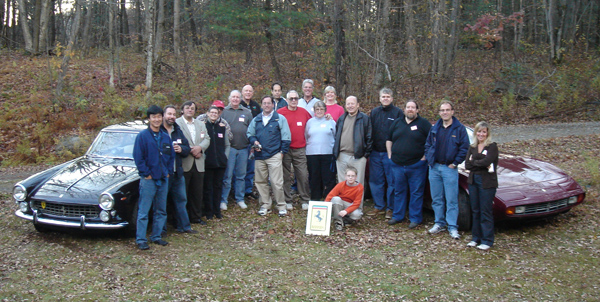 I want to thank Mike and Marie Meehan for opening their lovely home and garages to us to have the tomyang.net party this year.  Everything was perfect, and we could not have asked for more. I’m sorry to have missed some of you at this year’s gathering, but there will always be next year to attend! Thanks everybody!