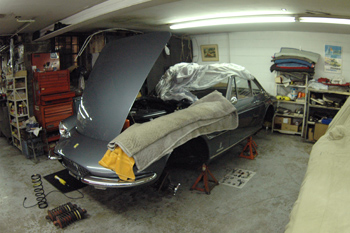 There was a 330 GTC in for a complete suspension rebuild at Francois’ shop today. Francois and Alvin had already disassembled the front suspension the day before, so my job was to take apart the rear suspension. 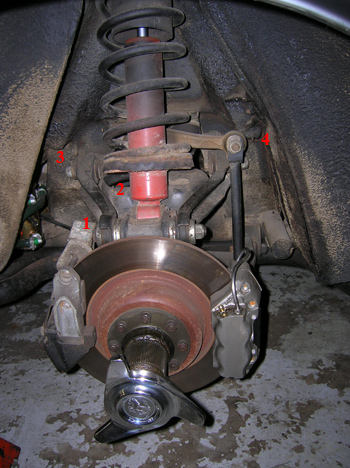 The first step was to unbolt the parking brake linkage so one of the upper control arm bolt could pass. After the first bolt was removed, the bottom of the shock could be unbolted. Step three was to unbolt the rest of the top control arm, and remove it.  Step four was to remove the sway bar drop link, and unbolt it from the lower control arm. As the lower control arm was unbolted I made sure the hub and brake assembly were wired to something so when the control arm was removed, the hub assembly did not hang from the brake hose. The top mount of the Koni shock needed access from inside the car to reach the bolt, but after removing a trim piece, the access hole was right behind the panel. 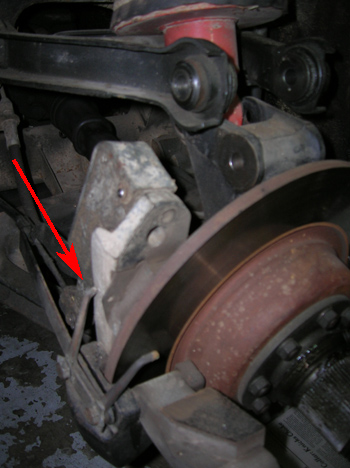 Here’s a detail of step one. The arrow shows the spring clip that has to come out to allow the parking brake to pivot out of the way. 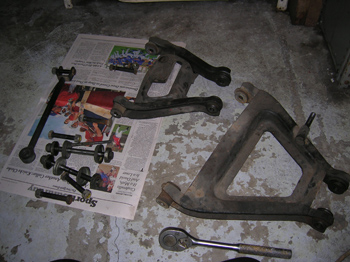 After a couple of hours, I had both sides of the rear suspension out of the car. The rear suspension had cups and o-rings that sealed some of the bushings, so they needed to be taken apart and inspected, but this car was amazingly clean and rust free. None of the bolts were stuck, so I guess I had it easy! 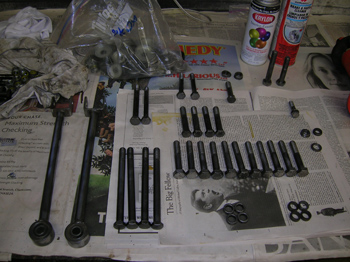 The rest of the day was spent at the wash tank and wire wheel cleaning grease, dirt, and paint off of all the suspension pieces. The bolts will be sent out for blueing, and the the cups and nuts will be nickel plated.