The rest of the suspension on the GTC looked great, so a thorough cleaning was all that was in order. I degreased all four corners of the car to ready it to receive the rebuilt control arms. 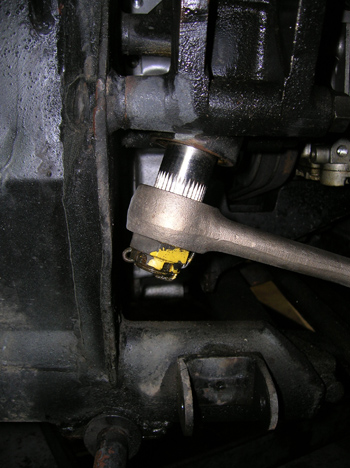 This car is unbelievably original with only 10,000 original miles, so many of the original factory marks are still present, like the yellow paint daubs on the suspension pieces. I will never look at these marks without chuckling about this story! 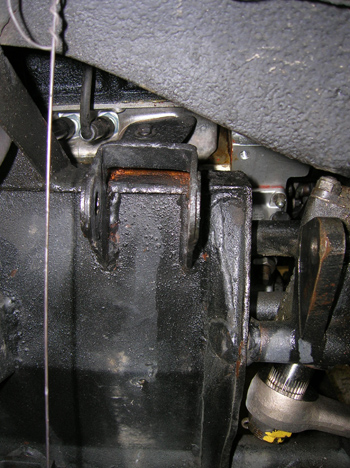 Another interesting detail on GTCs is a very important reinforcement tab that was part of a Ferrari recall for the early GTCs. The upper coil over shock mount were prone to stress cracks because it was not designed strong enough. François said that there were some accidents in Europe, and Ferrari sent out a recall to have some additional welding done to the cars that had already left the factory. On this car, the bottom of the shock tower mount shows how small the original structure was. 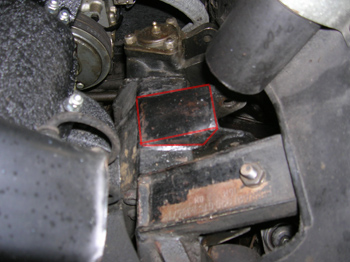 The view from above, however, shows how an additional piece of metal was welded to the chassis to strengthen this area (outlined in red). I still find GTCs without this modification, and try to warn the owners of this danger, but I often get looks of disbelief. Now that I have some visual proof, I’m hoping I’ll be more convincing. François says there is an official letter that was issued, and I hope to one day find it so we can fix this very dangerous situation. If you own a GTC, could you go out to your garage and check for me if yours was fixed? Chuck, Mike, Jim, are three owners I can think of with GTCs. E-mail me. 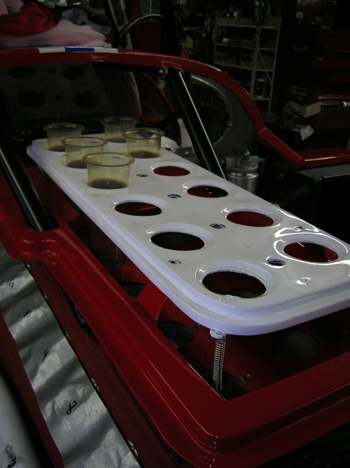 After the drudgery of cleaning suspension pieces, I was rewarded with working on the 512M. Okay, it might not have been a reward considering I had to reinstall the velocity stacks on the intake, but I guess working on a rare race car is worth the struggle! 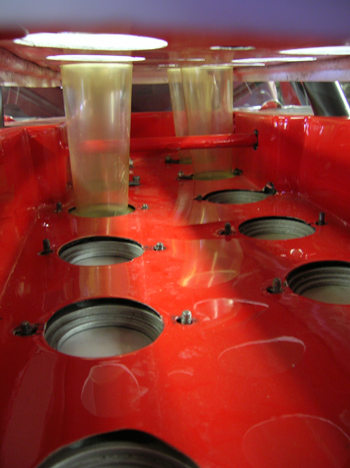 The struggle with the intake was each of the plastic velocity stacks were held in place by 8 mm nuts and corresponding metal clips. The stacks could only be fitted from above through the upper fiberglass plate, but the nuts had to be placed on their studs in the limited access area between the upper and lower air intake assembly. Extra care also had to be taken not to drop a nut or clip down into the intake, or else we risked ruining a priceless engine. It took over an hour to put this thing back on! 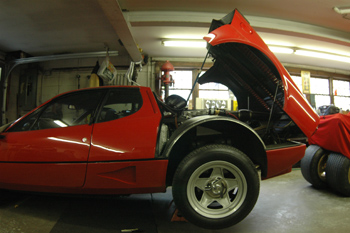 As always, there are always plenty of interesting cars at François’ shop, and while I ate my lunch, I found myself staring at this 512 injected Boxer. Even though this car is over 20 years old, it’s a modern Ferrari I would love to own! For a while they were under priced, hovering around $75-$100K. Although that may sound like a lot of money for a car, the Boxer has a lot to offer. Although hard to call a 5 liter Flat-12 cylinder Ferrari subtle, a 512 BB certainly is more subdued when compared to the Testarossa that replaced it.  Unfortunately, the Boxer prices have risen past my economic realm, but I still like dreaming!

Speaking of Testarossas, could they ever be a possibility? Probably not for me. Their side strakes that pushed them to the edge of automotive design has made them look dated twenty years later. I don’t know if another 10 years will make this look hip, but I will forever think of Miami Vice when I see these cars. On the flip side, they are a real bargain today. $50-60K will get you a pick of several Testarossas, so if you can deal with something that will remind you of the go go 80s, now may be the time. Except for the 365-400 2+2s, bargain V-12 Ferraris are over $75K these days, so the Testarossa may be the only choice to jump in the game! 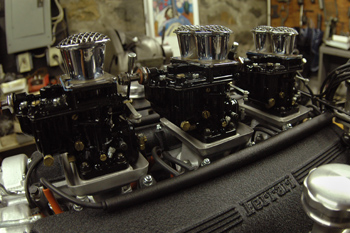 Another nice thing to look at in the shop was this early inside plug 250 engine. François is completing an engine rebuild, and it’s going through its final engine detailing.

Here’s a view not often seen of a 250 engine. I never realized how offset the distributors were to the centerline of the engine.