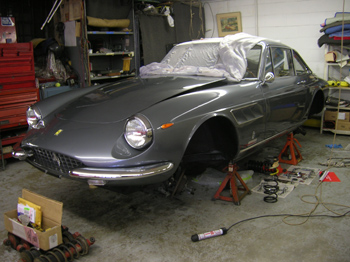 The fun thing about the reach of my website is I often end up talking to the owners of the cars I work on at François’ shop. The owner of this low mileage Ferrari contacted me about his car a week ago, and we’ve been talking about it privately. He’s wrestled with the idea of restoring this car, and I agree with many other Ferrari owners not to do it! This beautiful Grigio Fumo 330 GTC deserves to be preserved in its original form to remind people what these cars were like when they came from the factory. Much of the original paint and details are still on this car, and they show how nice the body work really was when they came from the factory. Now, it’s not as nice as the “Concours Quality” you see today at all the major shows, but I’d like to see a judge try to take points off for this paint! This car is what the standard should be set at, and over restored cars should get deductions!

I need to start documenting the details so we can have a standard to follow with things like weather stripping. All too often, parts suppliers are substituting parts that were never original to these cars, and telling people that what they have is correct. With an original car like this, we can prove to these suppliers they’re wrong! I’ve go a lot of work to do! 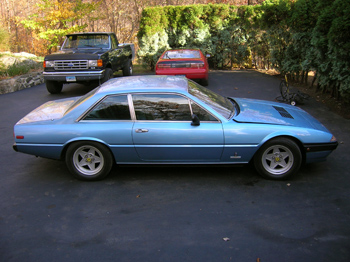 This 400i Automatic has been in his shop for an embarrassing long time. It originally came in to have its dash and center console refurbished, but during its stay, problems kept coming up that kept the car from going home. Not to François’ fault, brakes would seize, or a switch would go bad. The latest problem was a broken side view mirror. 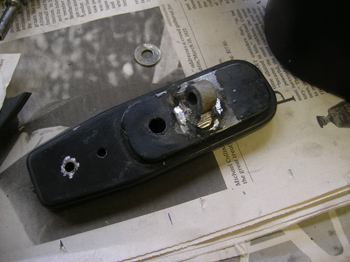 The pot metal base broke and had to be welded, and François got it back from his welder who did a nice job reattaching the little piece that broke off. My job was to remove just enough material from the weld so it would fit with the mirror without weakening the weld, or break it again. It took a lot to fitting and filing to get everything right, with a certain amount of stress not to break it again! 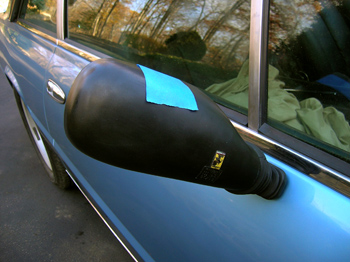