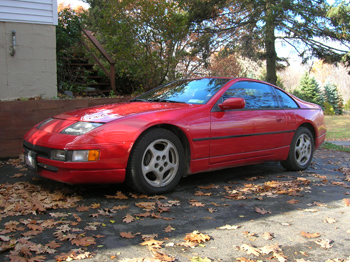 Some of you may have noticed a red 300ZX sitting in the background of some of the pictures, and I think it’s time for an introduction. This 1990 normally aspirated Nissan 300ZX is my new commuter car. I bought it from a friend of mine who originally bought it from my brother-in-law, so I’ve known the ownership history for most of the car’s life. I needed a car for my 90 minute commute to François’ twice a week, and instead of spending the money on something more practical like a Civic, I decided to buy this car for fun! She’s certainly fast enough, and I have to be extra careful not to get pulled over in this bright red car, but driving the twisty roads where I live is a joy.

The downsides are it needs a a full exhaust system, and the fourth gear synchronizer is weak. I’m going to try to get the exhaust to last through the winter, and install a cat-back stainless system in the spring, and I’ll wait that extra beat every time I shift from third to fourth! The  only other problem I’ve had with this car is an occasional stumble at low rpms. It has the symptoms of a fouled plug, but after changing all platinum tipped plugs (Have you spent $70 bucks for Ferrari plugs?!), the problem still pops up every now and again. An “Italian tune up” (high revs at high speeds) seems to clear things up, so who knows what it could be. These cars are notorious for bad electrical connectors, and I guess I haven’t found the one that is going bad!

What does that bring the Yang Stable to? We own six cars with three inside, and three outside… I’ve got to find more space!