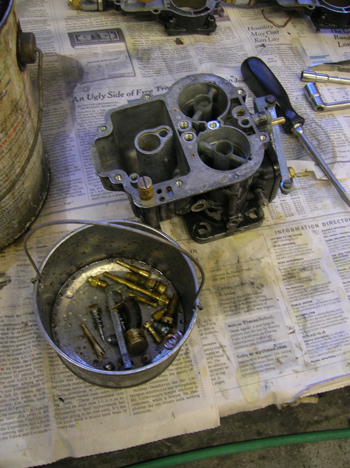 Scott Garvey’s 250 GTE has been at the shop for a long time, and it’s getting close to going home. During its stay, the car has gotten a full engine rebuild, and a fresh interior. Scott wants the car fully sorted so he can drive it with confidence when he takes the car home, so François’ been putting some mileage on the car.  With the length of time the car’s been sitting to get the interior refurbished, the gas in the carbs has caused some problems. François experienced popping and spitting from the carbs and general poor running, so we began the process of pulling all the carburetors again, soaking them in carb cleaner, and dissolving the varnish residue left by old gas. 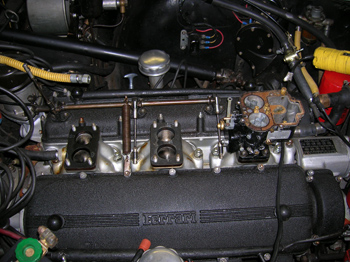 In the middle of putting everything back together, François was called away to another job. He told me he had to go out, and it was now my job to finish the assembly!? I was very careful to make mental notes as I disassembled the carbs, but I wasn’t 100% sure I could put everything back together correctly without the Frenchman’s guidance. Luckily, François finished the first one, so I had something to copy, but I was a little worried I would mess something up.

When François returned a couple hours later, I had all three carbs mounted and hooked up, and I admitted my fears of doing something wrong. He replied that this was the only way to learn, and “we know pretty quickly eef you did somsing wrong!”

As the electric pump filled the carbs, I was first relieved to see the floats fill and the needle valves close. The accelerator pumps were tested, and all six jets sprayed evenly down their respective throats, but the true test was when the starter was engaged. I was elated to hear the engine catch and idle at first try! I spent the next few minutes watching François fine tune the carburetors until the engine purred. It was fascinating. I asked as many questions without getting in the way, but I concentrated more on his technique. Once François was satisfied, he shut the motor off, and he gave me a quick lesson on carb tuning. I tired to absorb as much as I could, but I knew that I would not master the whole process in one sitting, but if I paid close attention, it would one day become second nature to me. That is the life of an apprentice!