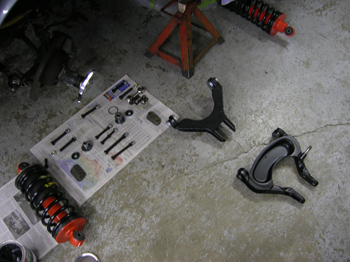 The control arms came back from the powder coaters, so I could finally get to work on the re-installing the suspension. François carefully laid out all the refurbished pieces so we would put them back the way they came out. At first glance, the bolts look all the same, but there are some that are slightly different, specifically used where there may be a clearance issue.

By the end of the day, I managed to complete three corners of the car, and nearly finished myself in the process! Although François has been restoring cars for over 30 years without one, this job would have been great with some kind of vehicle lift. Raising the car so I could be standing, or in an upright seated position, would have been great. Instead I was hunched over with my head stuck up inside the wheel well for a whole day! There was no sympathy from François as I’m sure he’s gotten used to the being in that position after this many years. It must have sounded like the classic conversation between a master craftsman with his apprentice discussing how something is done the “right” way. 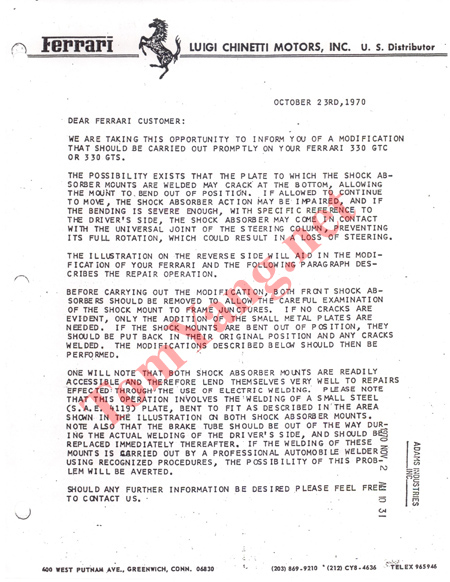 In discussions with Clem Simmons about his GTC and the recall on these cars, Clem sent me a copy of the original letter. François told me that there is another letter that was sent to Chinetti (Pronounced Kinetti, By the way!) Motors that was confidential between the factory and the dealers, but he can’t seem to find it in his paperwork anymore. 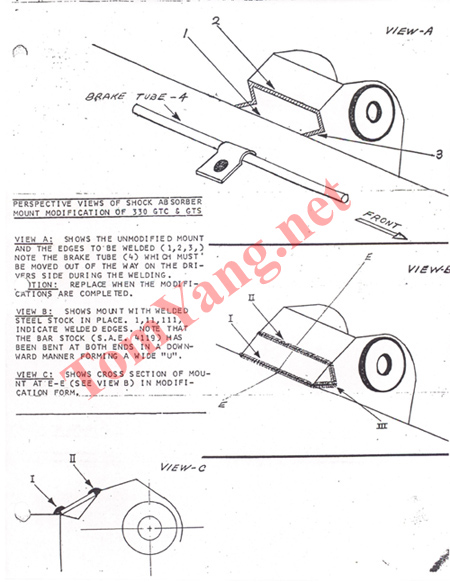 The story François told was there was one accident in the States with a Chinetti Customer where the left shock mount cracked. As the shock broke off, it jammed into the steering, and made the car uncontrollable. The customer survived, but sued Chinetti, and Ferrari. Another accident was rumored in Germany with similar results. These repairs were advised by the factory when they admitted to the design flaw. So if you see a GTC, and it does not have this modification, please let the owner know so we might possibly save a Vintage Ferrari, and it’s owner too!