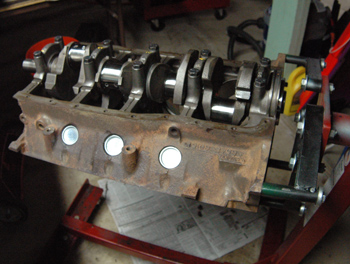 I received the pieces for my engine from the parts supplier, so I began the assembly of my 289 motor. I installed the new Edlebrock Performer Camshaft making sure to coat everything with liberal amounts of assembly lube. After that, the crank was installed. I paid special attention to the rear main seal on the rearmost main bearing as a leaking seal here would cause a nightmare in the future! 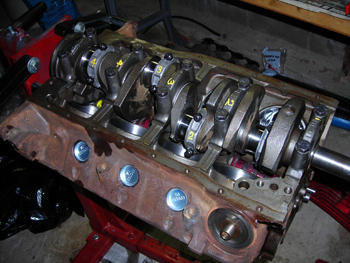 After the crank was installed, I began installing each piston into its respective bore. Finding the right technique of installing a piston ring compression tool around a slippery oil soaked piston was a little trying, but eventually I got the hang of it. There were a lot of things to remember with each piston before installation, and if any were forgotten, could have caused problems down the line. I had to remember to oil the piston rings and pivot, clean the bearing surfaces with solvent before oiling, install rod bolt covers to protect the crankshaft journals, orient the ring gaps correctly before installing the compressor tool, and make sure the notch in the piston was facing forward as it was installed. After each piston was tapped gently in place, I torqued down the rod cap to its specified torque setting. 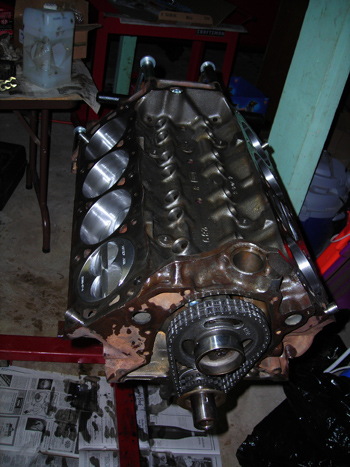 After all eight pistons were installed, I attached the new timing chain and gears with the fuel pump eccentric. I was ready for the timing chain cover, but it was being repaired at a local welding shop. Two of the bolt holes were stripped, and I wanted to see if the cover could be aluminum welded and re-tapped instead of replacing it. I could have easily bought a new timing chain cover, but bringing my cover to a local welder was a good excuse to meet some of the local craftsman. Their ability to weld my aluminum timing chain cover will help show if I would want to use them in the future for other welding projects. It was better to have them repair something that was readily replaceable for their first trial instead of something made of unobtanium like a Ferrari engine part!