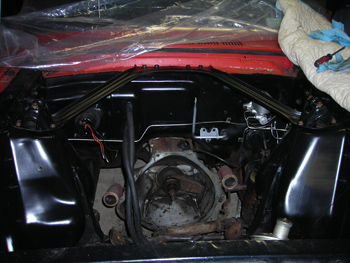 The preparation for the rebuilt engine continues inside the engine compartment. Three coats of semi gloss black has been applied, and I’m trying my best to paint all the rest of the parts in their right finishes. 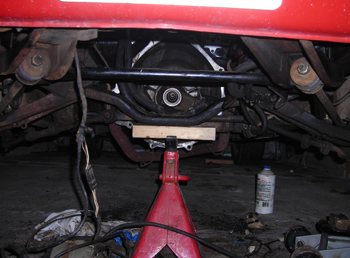 A couple of weeks ago, I tried to fit the stronger “export brace” that strengthens the engine compartment, but none of the bolts would line up. I took the advice heard from other Mustang owners with similar issues and tried supporting the front of the car from its cross member. Supporting the weight of the front of the car from this position would “relax” the shock towers enough to fit the export brace. 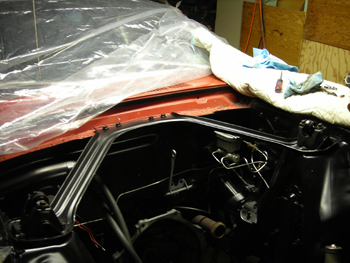 After two weeks in this position, things started to line up. I enlarged the holes near the firewall and everything finally fit. It’s nice to know I now have some stronger support in the engine compartment, especially since I’m going with more power. Eventually, a cross bar will also go in, but first the engine needs to be installed. 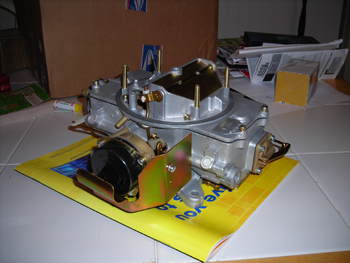 With the installation of my intake manifold, it was time to address the carburation. Several years ago, I bought a 4100 Autolite from a friend with a cast iron manifold. He told me it was from a “K-code” Mustang from the 60s. I paid $100 bucks for the whole set up, and waited all these years to make good use of this intake and carburetor. I decided to send the carburetor to Pony Carburetors to insure a thorough rebuild with all the correct finishes and detailing. After sending it out to New Mexico, I received a call from PC with an offer. It turned out I did have a “Hi-Performance” Carburetor and they were willing to trade a free rebuild on a replacement carb correctly dated to 1965 for my rarer ’66 Hi-Po carb. I weighed the offer as I was on the phone, and decided to take them up on it. The Hi-Po carbs had a slightly larger venturi, and would flow more air at wide open throttle, but it would be nothing I would really miss for a free rebuild! The delivered carb also came with an automatic choke, so I wouldn’t have to worry about plumbing in a choke cable for the Hi-Po version. If I ever needed more carb, I could easily upgrade to a aftermarket carburetor, and I would still be ahead of the game for my $100 dollar investment.

P.S. I missed a couple of names on my pledge drive, but I found the problem and revised the list. Please check to see if your name is on the list, and if you’re still not on the list,  e-mail me and yell at me!