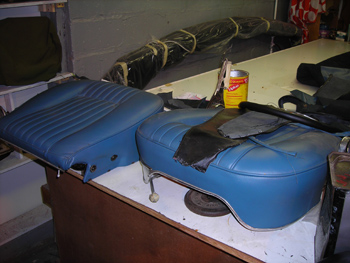 There were a set of seats that needed finishing at Frank Segreto’s shop, and I went down this week to lend a hand. The seats belong to Steve Patti and came out of a 330 America, SN 5061. Steve sent his interior to Frank a while ago for a complete restoration, but Frank’s health has deteriorated in the last several months. Frank just doesn’t have the strength to finish these seats alone, so I tried my best to help get these seats done. 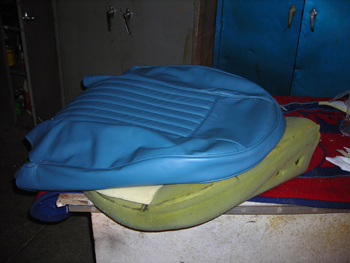 The two seat backs for the front seats needed fitting, so I installed the first one several times. Each time I tweaked its fit to the seat frame. I wish it was as easy as it sounded, but there were a lot of details to installing the cover to check its fit. Sections needed to be tied and secured while other parts had to be temporarily hog ringed in place to see if there would be any wrinkles. 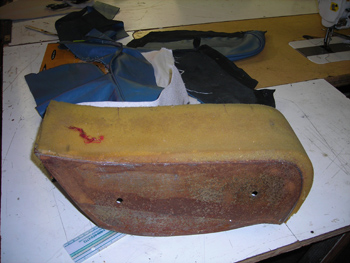 While I worked on getting this seat back to fit on the frame, Frank sewed new sections for the center console and rear armrest. 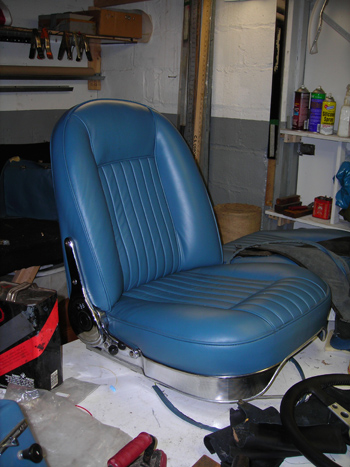 After several hours over the course of two days, I had one seat completely done. We had to re-sew a section for a better fit, but eventually things were fitting nice and tight. (notice the nice new seat foil installed on the bottom of the seat?) 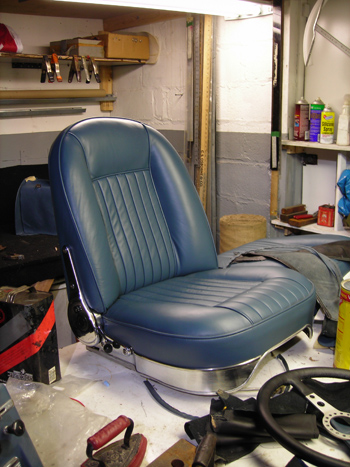 A lot of effort was made by the owner to match the new leather to the original color, and the camera was having a hard time showing it. Here’s another picture taken without flash that shows a hue that is closer to real life.