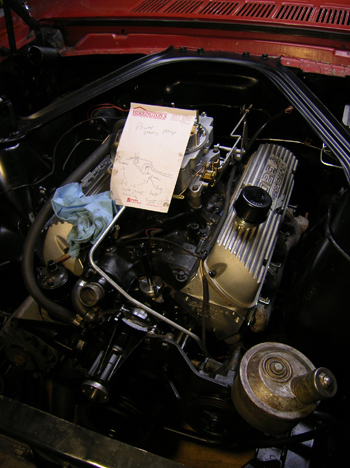 With the Mustang engine installed in the car, I spent a couple hours everyday this week attaching the accessories and detailing the engine compartment. I took notes on how the brackets and pulleys were arranged on the front of the engine, and I followed them to put things back the way they were. I took this opportunity to make some custom spacers instead of reusing the washers found on the engine. Over the years things were modified by other owners and parts were replaced or changed, so I wanted to make some of the hardware look better than what I had. 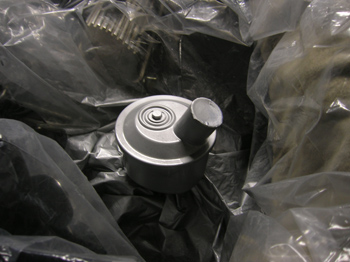 With the power steering pump mounted back on the engine, it was now a good time to paint it. I had stripped the paint off the reservoir when I stripped the engine compartment, but found it too hard to paint when it was hanging loose.

Several weeks ago, I decided to order a new dual exhaust system for my Mustang. The car came originally with a single pipe exhaust system, and not only would it have restricted the performance of my new engine, it was also rotted beyond repair at one of the muffler flanges. Unfortunately, installing a dual exhaust system correctly on a single exhaust exhaust equipped Mustang is not so easy. The rear flexible brake line interferes with a second pipe running over the axle tubes and would have to be modified to a dual exhaust set up. New stainless steel brake lines were ordered, along with the associated brackets and hoses. and a complete dual exhaust system. As the parts started arriving at my house, I discovered the H-pipe of the exhaust system was back ordered. After a week of waiting, I called my supplier and found the wait for this pipe may be another three weeks!

Without this pipe, the exhaust cannot be hung, and without the exhaust, I cannot start my Mustang engine! The camshaft needs to be broken in at initial start up, so the engine needs to be run at 3000 rpm for approximately 20 minutes. Doing this without an exhaust system may not be the best for neighbor relations, so I’ll have to wait a little longer to hear her run. It’s been over 4 months since I started this project, and you can see even with steady progress, it always takes longer than expected! 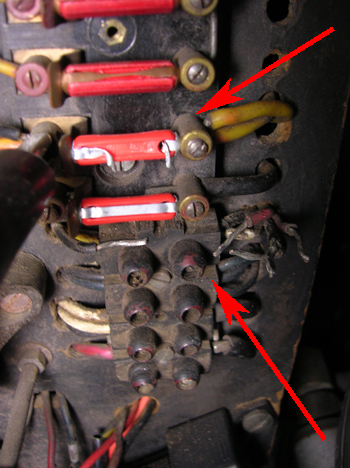 Switching gears while waiting for paint to dry on the Mustang I’ve been trying to locate an electrical problem with my Ferrari.  A fuse that powers the driving lights keeps blowing, and I can’t seem to find the source of the short. This circuit seems to work for a while before blowing, but the intermittent short has been elusive. I traced the circuit (the top arrow) to a junction that distributes the current to all the lights on the  circuit (bottom arrow), but nothing seemed amiss. I checked all the lights and connections, and have not seen anything wrong. I eventually reinstalled a fuse and found everything working without blowing the new fuse. I guess I’ll have to wait until it happens again to look some more.

One trick I’ve read was instead of replacing the fuse and blowing another one, bridge the blown fuse with a 12v test light, but I don’t know if this method would work finding shorts only when the driving light switch is powered. My understanding is bridging the fuse would put the lights in series to the test light, and the presence of a short before any of the lights would light up the test light.  Any advice would be greatly appreciated!