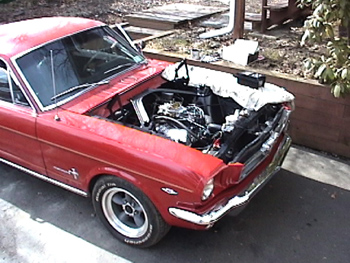 My friend Mike came over to help start the Mustang for the first time, and I’m happy to announce, all went well! (Click on the picture to see her fire up!) She caught practically right away, but we needed to prime the carburetor a little more before the fuel pump drew enough fuel to pump fresh fuel into the carb. Once Mike managed to get the timing of the distributor right, the engine started to idle too fast. I couldn’t control it from the driver’s seat as Mike asked me to throttle her back. There was a couple of seconds where you can see me trying to explain that the throttle was stuck and Mike grabbed the linkage from under the hood. It turned out the throttle return spring was too weak to pull the new carburetor linkage back to idle.

A new spring, and mounting tab are added to the list of things that need to addressed on the Mustang, but I am sure glad everything fired up and worked! There were a ton of exhaust leaks from bolts that needed tightening, so the engine was a little loud and raunchy sounding, but that didn’t stop up from us taking her out for a test drive after breaking in the camshaft.

The advice from many when braking in an engine is not to baby them. Compression rings need a certain amount of heat and pressure to seat properly in their fresh piston bores. A combination of hard acceleration at different rpms, along with short cool down periods were recommended, so I tried my best to tear up the back roads around my house. Mike asked if I wanted him to follow me in his car, but I threw caution into the wind, and asked him to jump in the Mustang for a ride. In my enthusiasm, not only did I leave the support car behind, but I also left my cell phone and driver’s license at home! Two greasy guys in a dirty Mustang with a loud exhaust note would have had a hard time explaining to the local police why were were terrorizing the neighborhood, but luckily we made it home without much notice. 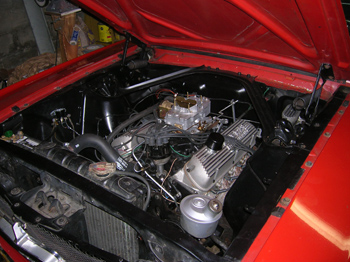 The Mustang is A LOT faster. It’s not an animal, but it certainly has been transformed. Compared to my 300ZX, it’s probably as fast in acceleration, but power comes on in a raw visceral experience. I have not had a chance to tweak all the settings, but right now, when the vacuum secondaries in the carburetors open from full throttle acceleration, the car lunges forward. I don’t know whether to giggle or hold on when the carb kicks in! 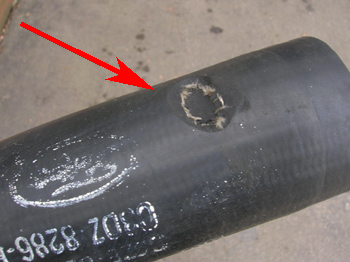 After each time of running the engine, we stopped to look things over. We were looking for leaks or loose bolts, but everything was holding together quite nicely. One potential problem, however, was the lower radiator hose. I installed a period correct hose for the car, and it was interfering with the cooling fan. Within the first 30 minutes of break in, the fan had worn halfway through the hose, and by the time we got back from our first test drive, the hose was barely holding pressure. I replaced the worn hose with the old hose that seemed to offer more clearance. I’ll have to get a replacement and figure out how to mount it without having the fan eat another one.