I’ve been busy with family things for the last several weeks so I have not had much time to try out my new engine in the Mustang. The weather in the Northeast has also been pretty crappy, so everything seemed to be working against me. On the first opportunity to take the Mustang out, I fired her up and took her down the road. I committed the biggest sin by not only leaving my cell phone home, but also my tools! About two miles from home the car started to run roughly, and I managed to pull into a convenience store/gas station just as she stalled. I opened the hood to find fuel boiling out of the float bowls in the carburetor, spilling onto the intake manifold! In my horror, I wondered if I still had a fire extinguisher stashed in the back seat of the car in case everything caught fire! Luckily there was no fire, but I also saw that the fire extinguisher was where it was supposed to be.

I sopped up the fuel with a rag, and realized I had a stuck float in the carburetor. a tiny piece of trash probably got caught in the needle valve, and was allowing fuel to fill uncontrolled into the carburetor. I first tried tapping the carb with the handle of a screwdriver I found in the glove box, but after I started the car again, fuel was still overfilling the float. The next task was to remove the top of the carburetor to exercise the needle valve in hopes to dislodge whatever was jamming it open.

An old Mustang with the hood up is an invitation for all car guys to stop and help, and within five minutes, I had four guys stopping to help. When I finally got the flooded engine to start again, a horrible noise came from the starter. The carb was working again, but now the starter was stuck on while the engine still running. When I tried to turn the ignition off, the car refused to stop!? The quick solution to stop the car was to yank the coil wire off. Somehow the new reproduction starter solenoid became stuck, so my small crew of helpers and I decided to disconnect the starter wire and start the car by touching it to the hot solenoid. Once the car started, we disconnected the starter wire and tied it out of the way. I thanked everyone for their help, and headed straight home.

I parked the car in the garage, and tried to figure out what went wrong. The solenoid was still stuck on, and unknown to me, still back feeding 12 volts to coil. I put the battery on a charger to gain back the voltage I drained while trying to start the flooded motor and took a break from the car. Looking at the problem the next morning, I swapped out the reproduction solenoid with the auto parts store solenoid I originally had in the car, but when I tried starting the car, she wouldn’t start. I found no spark coming out of the coil, so I pulled the coil out of my Sunbeam and alligator clipped the leads to the car the Mustang fired immediately. Checking the voltages, I found the coil was still being fed 12 volts, and shut the car off. Something wasn’t right, and the 12 volts at the continuous 12 volts at the coil must have burned it out when I charged it for an hour the night before. 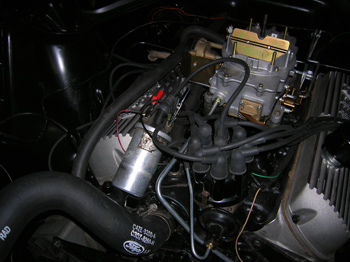 I spent a couple days thinking things over, and called a friend of mine to bounce some ideas off of him. Bill owns an auto repair shop in N.J. and is a long time owner of a Ferrari GTC. He’s been turning wrenches for a long time, and still remembers how these old Mustangs were wired. I had my suspicions about my problem, but it was very helpful to talk it through with another enthusiast. Within a few minutes, we concluded my starter switch was probably bad, and may have caused the starter solenoid to seize up. Getting a replacement ignition switch would probably solve all my problems. Thanks Bill!