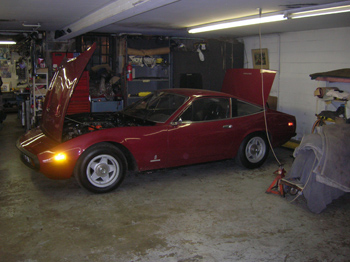 François called me the other day and said, “I have a job for you!” It was a 365GTC/4 that had developed a ticking noise from the engine. Knowing that this job was for me meant that it was not going to be easy, but I was up for the challenge. 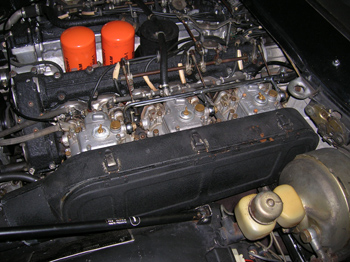 GTC/4s have a very low hood profile, and the solution Ferrari found to fit a V-12 engine under the hood without an unsightly bulge was to install side draft Webers instead of the more commonly found downdrafts. With a dual overhead camshafts to plumb the carburetors in, the air cleaners have to be mounted outboard of the engine. Any top end work on this engine requires removal of the air cleaners and carbs, even a simple valve adjustment can take more than a day! 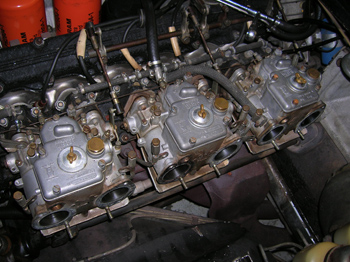 Removing the air cleaners required many tools configured specifically for this job, and whenever I thought it was impossible to reach a certain nut or bolt, François pulled another tool specially bent for that particular application. 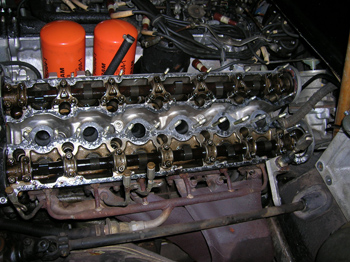 We finally reached the top of the engine, and did a leak down test. When François first heard the mysterious noise, he did a compression test and found #8 cylinder to be down in compression compared to all the healthy cylinders. Being the only possible clue to the problem, we looked closer at #8. The leakdown test, however showed only 3% loss in pressure. Leak down numbers usually confirm compression test numbers, so we were a little confused. After checking our work, and comparing them with the other cylinders, the same results were staring us in the face. All the other cylinders were showing good compression but #8 showed only 50psi, but still showed 3% leakdown.

The next inspection was to look in the oil pan. As François looked at the abnormal amount of oil pouring into the drain pan, he realized the crankcase was filled with a mixture of gasoline and oil. 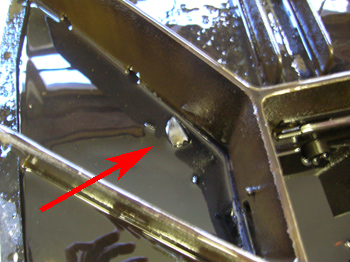 Once I handed the bottom cover of the oil pan from under the car, François exclaimed he found the problem. Bits of piston were found at the bottom of the oil pan. Although it was bad news for the owner, we were both relieved to find the “smoking gun” to our problem. The last thing we wanted to do was chase a problem without any substantial proof. 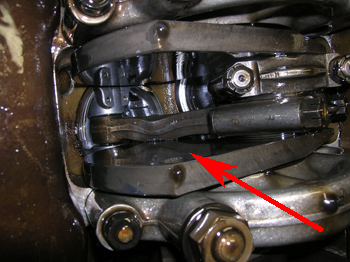 Looking up at the bottom end of the engine, it was apparent what was making the ticking noise. #8 rod was bent, and touching the crank counterweight. With each revolution, the bent rod was banging against the crank!

The clue to how this failure happened came from the all the fuel in the crankcase. One of the floats in the carburetors must have stuck open causing fuel to overflow into #8 cylinder before the engine was started. As the engine was started, #8 piston was on its way up on its compression stroke, but filled with incompressible fuel, the piston stopped short, bending the rod. The force of the impact probably cracked the piston dropping bits into the sump.