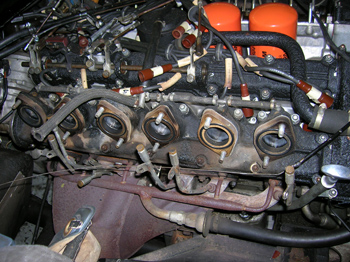 I continued my work on the 365GTC/4 with the bent rod. François wanted to pull the valve covers on the right head even though the left side of the engine had the bent rod. Since he had never worked on this engine before, he wanted to make sure all the cam timing marks were correct and in order before proceeding with the rest of the necessary repairs. This step required me to remove the right side carburetors along with all the associated linkages and  plumbing. 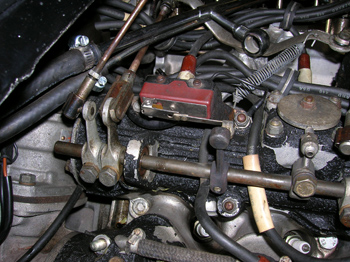 There were a ton of fidly little pieces to remove and note from throttle linkages, to ignition pieces. I know if I forget how all this goes back together, François will be pretty good at knowing how it all goes, but I’ll also have these pictures for reference.

The plan is to remove only the left head, and pull just the offending piston and rod out the top of the motor. Besides not having time to do a job of this scope (as usual, François is booked solid), removing the engine is no easy task on a C/4. Not only would the transmission have to come out, but I think I heard François mention the rear axle would need to be removed as well!? 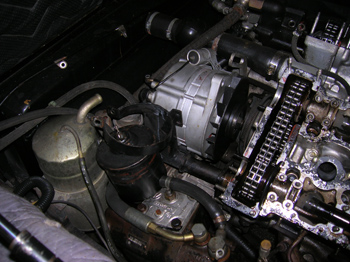 In order to remove the left head, the alternator had to be removed along with it’s mounting bracket. (Notice how the alternator is mounted facing towards the engine…kooky Italians!) I had to get creative on what had to be moved to gain access to certain bolts and brackets. The goal was to remove the least amount of stuff, while still making the head removal easy. 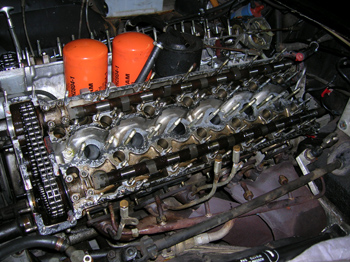 This shot was taken right before the cams were removed. The last two bearing stands needed to come out, and the chain could be taken apart. We were very lucky in that the link pin was accessible after the engine was rotated to #1TDC. We double checked to make sure we didn’t miss any bolts or nuts holding the head in place, and tried putting a little upward pressure on the head. François must have jinxed us when he said he’s never seen a 365 four cam motor with a seized head. The head didn’t move. Using a little more pressure and some penetrating oil, we managed to get a slight separation between the block and head. François decided it was best to let some time and penetrating oil work its way into the head studs to loosen things up. Rushing this process could lead to a disaster.

I was looking forward to extracting the mangled rod today, but I’m sure the next time I work on this motor, I’ll have a bent rod in my hand!