In between detailing the NART Spyder, I made a tool for pulling the head off the 365GTC/4 in the shop. Last week, when we tried applying a little of pressure on the head, coolant started to leak from the head gasket. This was a good sign as it meant the head was moving enough from the block to leak from the gasket. Corrosion on the head studs was probably locking the head to the block, so we needed something to apply steady pressure to the head. 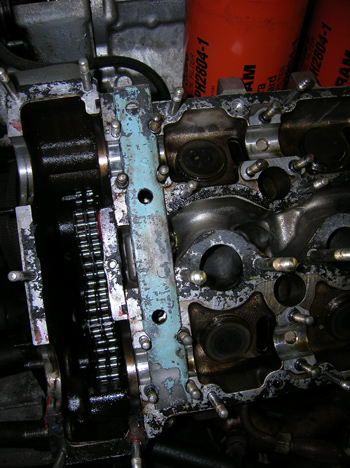 François did not think we would have to make a full engine plate like he’s done for the two cam Ferrari series engines since the head showed signs of moving. We decided to try a small plate made from 1/4 inch bar stock. I carefully drilled holes and ground clearance for the cam bearing stand studs. 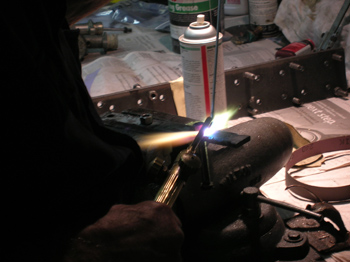 François brazed a couple of nuts to the bottom of the plate for bolts to push against the head studs. In the background, you can see the head plate François uses for the 3 liter V-12 blocks. We were cannibalizing some pieces from it to make our new head puller. 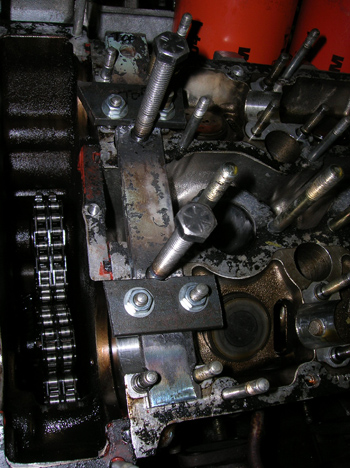 Here’s a shot of the fixture mounted in place to the cam bearing saddles. It would have been nice to have two of these fixtures mounted on either end of the head, but I only had enough 1/4 bar stock laying around to make one! I got pretty fast at swapping sides after moving the head up a fraction of an inch every time. 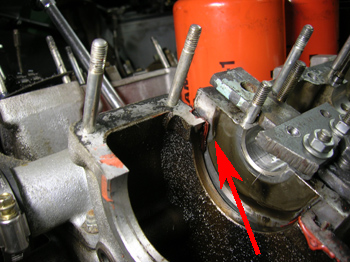 You can see the head beginning to move away from the timing chain housing, but it was slow going. Going too fast could jam something, and risk stripping a stud, or worse, cracking the head. By the end of the day, the head was coming along nicely, but it looks like it’s going to fight us all the way to the end of the head studs!