I took a couple days off from looking at the 330 America. Sometimes it’s healthy for me to step away from a project so I can start fresh. I spoke to François the next day and discussed my problem. He felt I made the right choice in getting the car towed, as there was no way to stop raw fuel from flowing into the mufflers, heating them up to dangerous levels. The other concern would have been washing the oil from the cylinder walls with the unburned fuel and scoring the cylinder walls. 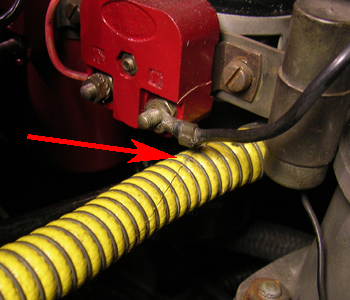 I popped the hood and took a closer look at the ignition system, and noticed something interesting. The wire running from the distributor to the resistor on the failed coil was very close to the wire wrapped yellow fuel hose running to the back of the fuel fuel rail. Upon closer inspection, I could see rub marks on the wire wrapping from the coil wire. Could my coil failure be associated with the wire coming out of the distributor grounding out on this fuel line? This ground path would keep the coil grounded the whole time, causing the coil not to fire. Since this was a flexible fuel line, I could see it occasionally moving when the engine was running, causing the coil to work normally. Swapping the old coil with the Mustang coil may have changed the wiring position enough for me to make it to Scarsdale but eventually, started grounding out again.

(I noticed the cracked resistor, but its resistance matches the other one, so I glued it back together with some epoxy)

I told François of my discovery, and he said, “Ah! You don’t hav boots for dee coil wire?” I admitted that I only installed a pair on the coil tops, but neglected to put them on the resistor side of the wiring. François explained that rubber boots are concours correct on the + side of the coil, along with the boots on the resistors. A boot was not required on the solid red wire from the resistor to the coil. Not only was this correct for a show car, but I now found there was a function for these boots!

I bent the hard fuel line connected to the yellow fuel hose to move it away from the coil wiring for now, but I guess I’ll have to order some rubber boots!

The next step is to see which coils still work after withstanding this electrical short. François also warned to check the springs on my points for heat bluing. The grounded coil wire could have excessively heated up the points which usually shows up in the spring, making it brittle. François has seen the spring on the points set break from excessive heat. One set on my dual point set up looked a little darker, but not necessarily blue, but I’ll have François take a look for me when I get the coil issue sorted before ordering a new set of points!