Interior Work, and My First Podcast 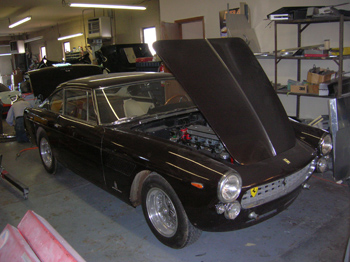 I spent a couple days working on Michael Greenspan’s 330 America. It was a kind of house call as his car had her floor pans replaced, and it was my job to re-install the new interior. We had a long list of things Michael wanted to accomplish over the two days, but the priority was with the interior. 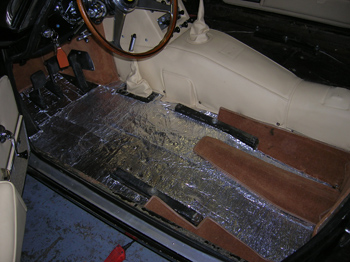 There was no insulation beneath the carpets, and I insisted on insulating the floors, especially after my experience with the ultra hot mufflers (see Road to Scarsdale). None of the heat was felt inside the car, and the insulation I installed on my car may have even prevented anything from catching fire inside the car. This extra barrier would also help keep some of the road noise out of the cabin. 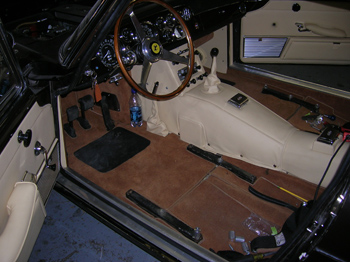 With all the carpets glued and snapped in place, we were ready for the seats by the end of the first day’s work. What took Michael about 2 hours to strip out of the car took us over eight hours to get back in the car! 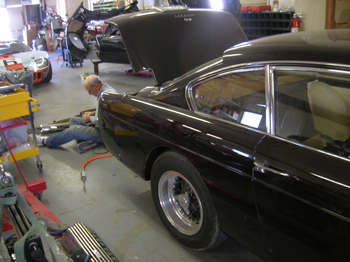 While I tended to one side of the car, Michael would work on the other end. Here he was assembling the newly chromed bumpers. By the end of the second day of work we managed to complete the following:

We accomplished a lot, and the only thing keeping the car from going home was the missing front bumper that was still at the chrome platers.

While I was staying with Michael to work on his car, we recorded my first Podcast! It’s the first of what I hope will be more of its kind. I hope you like it, and let me know what you think! I have to apologize in advance for the quality of the recording. I recorded the conversation in a car while it was raining, so the background noise leaves a lot to be desired. As a former audio engineer, I should have known better, but as producer, I know it’s better to get it on tape, than to sweat the quality!

Download Podcast about How Michael came to own his 330 America.
Windows users will probably have to right click on this file and save it to your hard drive. In any case, please try to save this mp3 file to your hard drive as it’s 30 minutes long and about 15 mb, so multiple downloads will overload my server. Thanks, and enjoy!