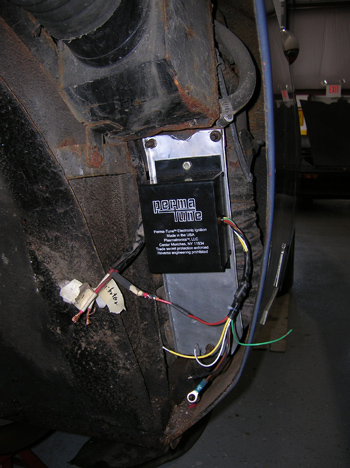 I fabricated mounting plates for the new Permatune ignition boxes. I used aluminum because it’s easy to cut and form, but I decided to bend the edges to stiffen the plate. The Permatune is less than half the size of the original Dinoplex ignition box, and a lot lighter. I kept an inner dialogue in my mind as I worked, joking about how the old boxes were so heavy. “The owner may feel a difference in handling with the lighter Permatunes!” “The old Marelli boxes were probably so heavy because they were steam powered!…” I think the heat was getting to me! 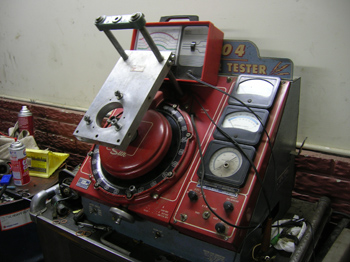 The distributors needed to be checked before firing up the car with the new ignition boxes. A fixture that was common years ago, but is now a relic of automotive repair shops is the Sun Distributor Machine. With computer controlled ignitions, these machines became obsolete in checking distributors for their function. Having one of these today, however, is invaluable when it comes to checking Ferrari distributors. 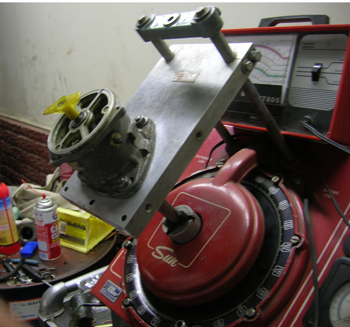 We mounted the distributor to Sport Auto’s Marelli adapter along with the correct shaft to mate to the machine’s drive shaft. A second Dwell Meter was used to check against the old Sun Machine. 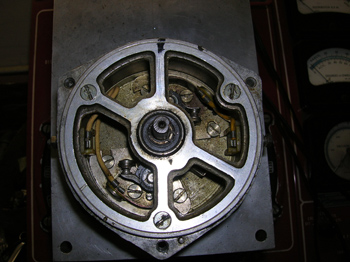 The first task was to set the point gap, and check for wear on the points. With the cost of points and inconsistent quality of replacements, everything was done to reuse an operating set of points. A good inspection, filing and cleaning is often the only thing needed to keep a set working properly. Sport Auto also had plenty of spare parts to replace any worn items on a points set. 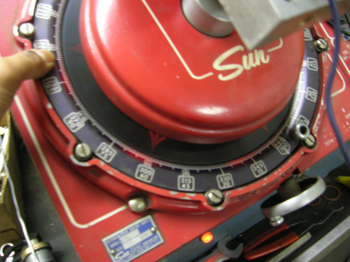 The Sun Distributor Machine generates voltage to pass through the points just as it would when the distributor is installed on a car. A strobe light illuminates the position of each distributor lobe as the points open to fire a spark. Each Ferrari distributor for a V-12 operates like a 6 cylinder distributor firing one bank of cylinders, so points illuminate on the test machine at 60 degree intervals. The rotational speed of the distributor can be raised to check the advancing mechanism.