Getting the Point, and 328 Gets Delivered 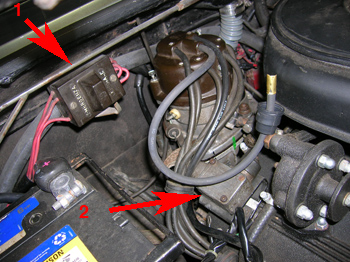 I spent the weekend getting e-mails from the “ignition knowledgeable,” and reading them over carefully to understand what was being taught. I applied what I learned to what was actually happening in the 365 ignition system, and I now have a better idea what is going on! It turns out the U.S. specification 365GT 2+2 is not a true “dual point” ignition system. During the late 60s when these cars were built, the U.S. had begun regulating and limiting the amount of emissions from automobiles, especially at idle. All the auto manufacturers were scrambling to meet the new restrictions, and Ferrari had to comply just like everyone else. What was installed in the 365 had two sets of points in each distributor, but instead of working all the time, one set fired the coil only at idle, slightly retarded in timing for better emissions. This process was accomplished with a micro switch attached the the throttle linkage (#2 in the picture). Once the throttle was pushed, the primary points would operate, and the distributor would work like one with a single set of points. Ferrari also installed a Marelli Capcitive Discharge ignition system to increase the voltage of the spark. Ferrari, or Marelli, must have known these systems were unreliable, as they installed bypass switches (#1 in the picture) for both CD boxes so one could limp home by using just the points. With 40 years of corrosion, modifications, and repairs by mechanics of varying skill, you can imagine how screwed up these systems could get.

We wanted to make the ignition system on this 365 bulletproof and foolproof, and the only way was to remove all the modified systems, and wire the car as simply as possible. I looked inside the switch box (#1), and found someone had disabled the switch by hard wiring the contacts to the ignition box, and the micro switch (#2) had it’s harness disconnected from the ignition. We decided to remove all these disabled systems to make the new ignition system very reliable for the owner, and easy to understand for future mechanics. All these extra pieces could be put in a box so if the owner ever wants to make this car a concours car with all it’s correct equipment, he can have the parts installed later.

Thanks to everyone who e-mailed me about the distributors. It might not be information everyone is interested in, but I sure find this stuff fascinating. As I collect more data, I’ll eventually try to put together a full report on how to use the Sun Machine on the various distributors and how to get your car working properly. 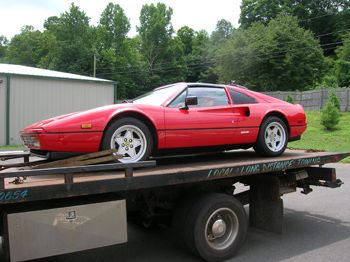 A Ferrari 328 was delivered to the shop today, and I was partly responsible. The owner contacted me for help with his car, and I recommended Bill Pollard to look at this low mileage car.

The car was picked up by a tow company that Bill uses often to insure safe delivery, and I thought this was a good opportunity to talk about towing. Unfortunately, if you own a Ferrari, you’re probably going to get towed at one point or another. Most of us in the U.S. have AAA Plus, which offers 100 miles of towing for an annual membership of under $100 bucks. It’s a bargain and it will pay for itself the first time you use it, but you have to join AAA for a year with a basic membership before you qualify for the “Plus” status. I tell everyone the three most important items to have with you when you drive an old car is an AAA card, a cell phone, and a fire extinguisher.

Anyway, getting back to towing. Calling a tow is a bit of a gamble no matter if it’s AAA or from the phone book, as you never know what kind of driver you’ll get with the truck. Always specify you need a flat bed. The wait might be longer, but the option of dragging a low slung Ferrari around the back of a tow truck is crazy! Most trucks have boards to drive the car onto so the chin spoiler doesn’t scrape on the flat bed. Watch closely as the car is being pulled up onto the bed of the truck, and ask the operator to stop the winch if anything starts to scrape. Watch not only the front of the car, but also the exhaust pipes, especially on the 60s Ferraris where the exhaust tips stick out. It takes a little diplomacy to make the driver feel you can trust him with your car, and to make sure he doesn’t screw it all up! 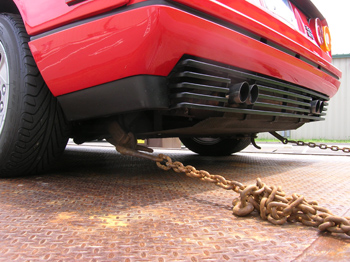 After my last tow, I’ve been thinking of carrying my own tie down straps. These nylon straps have a pair of D-rings that the tow truck can hook onto to prevent their metal hooks from ever touching your car. Having a set that fits your car is probably not a bad idea for that one time a tow truck shows up without anything that will be gentle to your car. If you look closely, the front of the car was secured with four straps without D-rings, but loops in the straps. Two were threaded through the wheels, and two under the front of the car that was attached to the winch. Frank did a nice job securing this 328, and is a good example to follow if you have a Ferrari of this vintage.