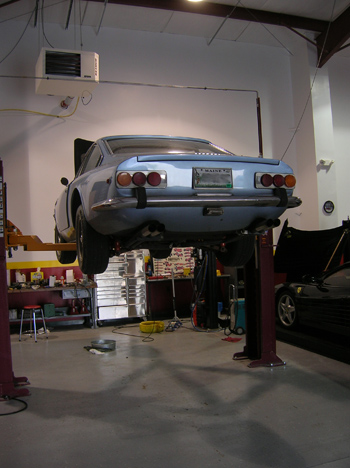 Sport Auto installed a new two post lift, and I had a chance to try it out with the 365 I’ve been working on. It will certainly save my back when trying to work under the car. I hope I don’t get too spoiled with it when I work at François’ shop! 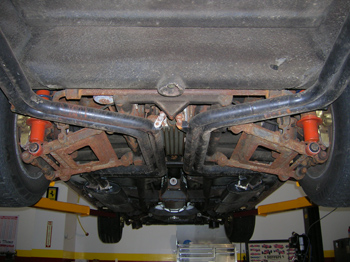 This car shows signs of being “ridden hard, and put away wet!” It’s nice to see a car that is driven regularly, but washing some of the undercarriage may have prevented some of this corrosion. We’re going to try to clean some of this up to keep the rust from getting out of control. 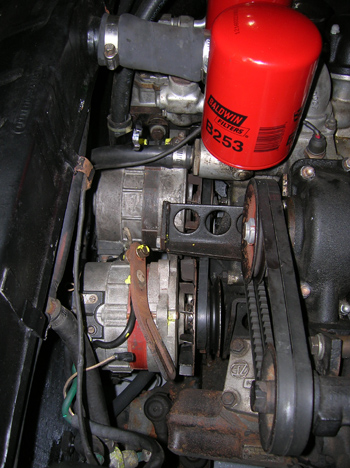 While I was waiting for Bill to get some electrical sheathing to finish the Permatune install, we decided to tackle the water pump on this car. Getting to it was no easy task as this car has two alternators that needed to be removed along with all the associated brackets and wiring. There is very little room in the front of this car, and the alternators were mounted facing inwards to line up with the drive belts. Even with everything unbolted and disconnected, the alternators would not come out without removing all the mounting brackets! They must have installed all this stuff when the engine was out of the car, and installed it as a unit. Thanks guys! 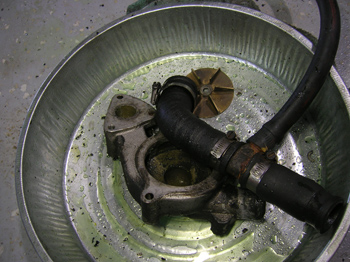 After much of the day spent on this job, I won out by getting most of the parts to the water pump off the engine. The Ferrari water pump impeller is driven off the timing chain, so there were no drive belts or pulleys to remove. but all the bolts and hidden nuts had to removed before the pump housing would separate from the motor. The impeller came out without a problem after heating it up good and hot to release the loctite. 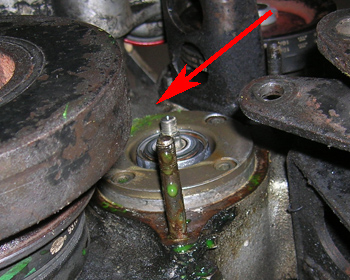 With the water pump housing and impeller out of the way, we can see the water pump base plate and carbon seal around the shaft. The base plate is showing some corrosion (arrow), and will have to be cleaned up before we re-assemble everything. 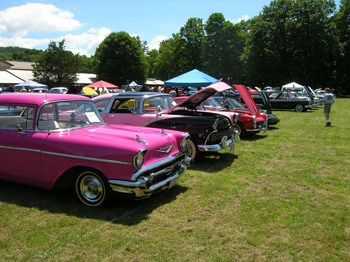 On Sunday, I took my Ferrari to a car show to meet some of  the car guys that live near me. I joined the “Columbia County Cruisers” and hope to attend their monthly meetings. Yale even brought his 330GT 2+2 to the show so my Ferrari wouldn’t be the only one! Besides the newer Japanese imports in attendance, the only other foreign cars besides our Ferraris were a newer Alfa Romeo Veloce Spyder and a 2+2 E-type. The rest were Hot Rods and American made iron. It was a nice day, and everyone loved seeing the Ferrari. I even won a trophy! 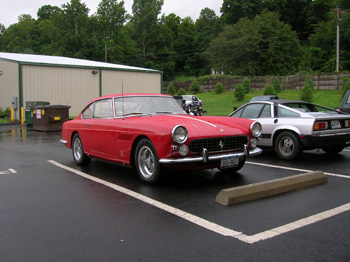 Basking in the glory of another show win, I decided to drive my Ferrari down to Sport Auto for work. I didn’t realize the weather forecast had changed to rain, but it managed to hold off until I parked my car at the shop. The 330 America withstood heavy rain all day, and I’m glad to report not a drop of it leaked inside. By quitting time, the rain started to lighten up, and I drove home hoping the Rain-X would hold out. Although my wiper motor is fixed, the Lucas motor just doesn’t seem to have the strength to instill much confidence that it would work for an extended period of time, so I decided to forget using it. Luckily, the Rain-x worked well, and I was able to see well enough all the way home.

With about 1500 miles on the car since François rebuilt the engine, she’s due for a head re-torque and general checkup. As the miles add up, the motor feels better and better. The Ferrari feels so much more refined when compared to the Mustang, which is basically the American version of a 2+2 coupe from the same era. The fresh modernized motor in the Mustang has a lot more power with tons of torque down low, but she does everything crudely. The shifts are long and vague. The acceleration is instant with abrupt surges, and the handling is moderate at best. The Ferrari feels more sedate, but if you mash your foot down through the long accelerator travel, Wide Open Throttle is pretty spectacular. Of course, by the time I got to WOT, I was over the speed limit in every gear except 1st. In overdrive, the car was quiet and comfortable. and cruising at 75mph+ was easy. I’ve probably said this before, but I’m really enjoying this car!