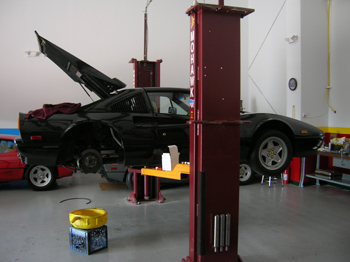 An owner of the 328 was driving along when his water pump bearing seized and the engine overheated. Luckily, he stopped before any serious damage occurred and only the water pump would need to be rebuilt. With Bill and Sean’s guidance at Sport Auto, I pulled my first water pump out of a V-8 car. 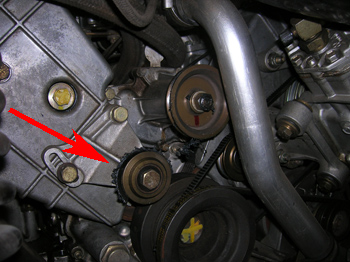 Ferrari used one of the skinniest belts I’ve ever seen for the water pump. It’s made of a plastic material, and melted quite nicely onto all the other pulleys as the seized water pump bearing stopped its pulley from moving. 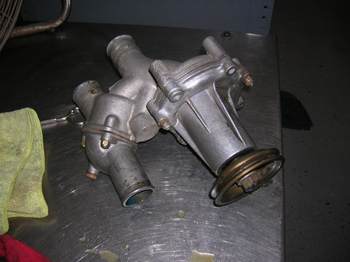 After draining the coolant, moving a hard coolant line, and disconnecting several hose clamps and hoses, the water pump came out of the car. 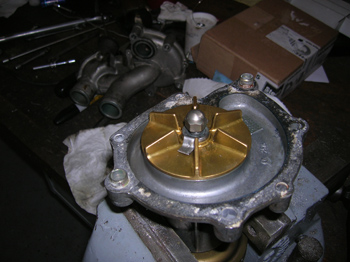 The impeller was removed after bending the locking tab out of the way, and heating the acorn nut to release the loctite. Behind this impeller was the carbon seal that needed to be driven out, and replaced with new parts. Be careful not to contaminate any of the mating surfaces, as anything on the carbon surfaces could cause leaks. 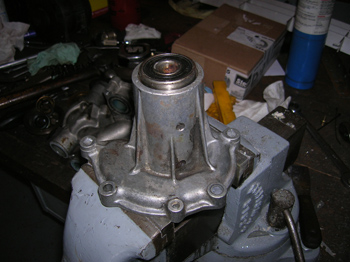 The bearings come out of the water pump by heating the housing until the aluminum expands greater than the steel bearing housing. I didn’t have enough heat when I took this picture, but with a little more heat the top bearing simply fell out of the housing. The second bearing was held in place not only with friction, but also a C-clip, so once the clip was removed, I let heat and gravity do its job. 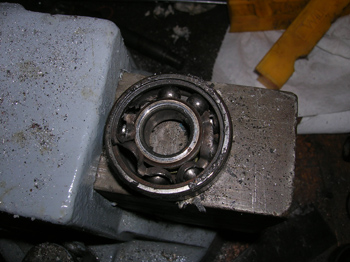 The bottom bearing didn’t look too healthy. I couldn’t ask for a better “smoking gun” for a seized water pump!

To quote most repair manuals, “assembly is in reverse,” so once everything was cleaned, the water pump went back together. A light coat of RTV silicone, and replacement o-rings where needed was applied, and all the parts that were removed were reinstalled on the car. The engine was filled with coolant, and I was shown how to bleed the cooling system of air, and this car was back in service!