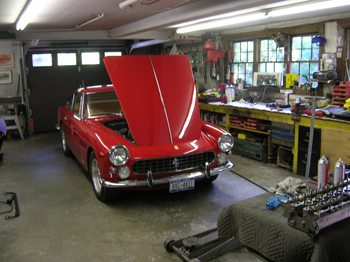 It’s been a couple of busy days at François’ shop. I drove my 330 America down to work one day to leave it overnight so we could re-torque the heads. I put about 1500 miles on the engine since François rebuilt it, and it was about time to see how everything was doing under the valve covers. 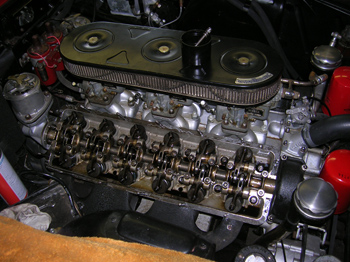 I bought a set of valve cover gaskets from Geoff Ohland at Partsource just in case they tore when we removed the valve covers. Luckily, my gaskets survived, so François will save my set for the next one. The head was pretty close to specification, with only a couple of bolts needing a tweak. Since the valve cover was off, François went ahead and adjusted the valves.

With the valve covers back on, we fired up the engine, and checked the timing on the engine. I pulled the air cleaner off the motor, and watched François adjust the carburetors. He’s explained the process before, but I watched quietly as he fiddled with the various screws, and synchrometer. I hope with the more of these tunings I watch, the more I’ll get the hang of it.

We found a couple things that should eventually need to be addressed on this car, so I added them to my list of “to dos.” The throttle shafts on my carburetors are a little worn, so air is leaking past the throttle plates as the revs come down. It makes the engine return to idle in a lazy manner, but I can live with it until one day I have new bushings made for my throttle shafts. The other issue was my steering box. It’s a little vague on center, and François was not able to take the slack out with the adjustment screw. Eventually, we’ll have to pull the steering box out to see what is worn out. None of these problems make my car dangerous, and it certainly didn’t slow her down. After her quick tune up, she’s running even better! Throttle response is quicker, and the drive home was a blast! 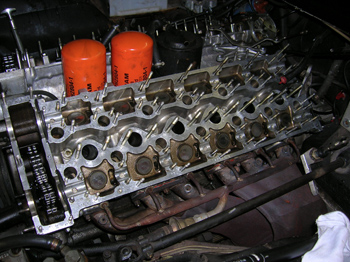 Work continued on the 365GTC/4 engine. The head, cams, and timing chains were installed. 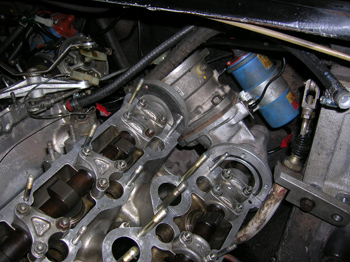 I struggled several times to get the driver’s side distributor installed. Trying to keep the light coat of silicone from drying out before I installed the distributor was pretty hard, especially when things just weren’t lining up! I found the throttle linkage bracket was interfering with the distributor housing, so it had to come back out to make room. I spent a lot of time cutting up my hands, sweating over the engine, and cursing this GTC/4 before the distributor finally went in with all the timing marks lined up. 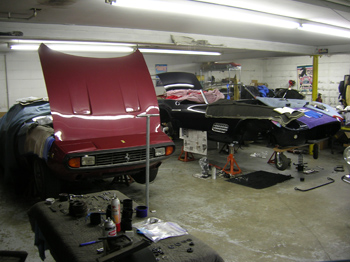 Luckily, whenever I got really frustrated with the C/4, I had another car to diffuse my anger. The Cal Spyder had plenty of small details that needed attention, so I could walk over to another job that was a little different, and a little less frustrating!