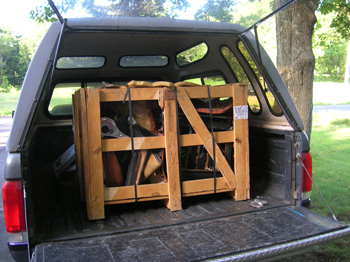 I’m sad to say another Ferrari four headlight 330GT 2+2 has met its end, evidenced by a large crate that contained its former interior. I’m sure the engine and various mechanical components were shipped to new owners by Tom Shaughnessy, but the interior was for Yale, a New York 330 owner.

The timing of the delivery was awful. I was leaving for Monterey the day the shipping crate was to arrive. I could just see the truck leaving the crate in my driveway after it was off loaded from the lift gate for my wife to figure out how get it out of the weather. I decided the best thing was to drive out to the shipping depot an hour away with my pickup truck to get Yale’s interior that day before I left for California. When I saw the size of the crate, and the forklift that loaded it into my truck, I knew I made a wise decision. 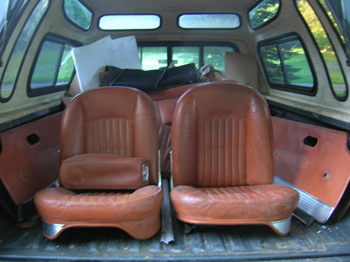 Yale has fought the need to refurbish his interior because he is very much about preserving the “patina” of his seats. There is, however, a fine line between patina, and worn out! As we watched Yales car age over the last few years, the seats began falling apart from regular use. First the foam crumbled from below, then the seats began to sag, and finally, the leather began to tear. No amount of repair can save leather seats once they rip, I don’t care what the ads say!

I thought Yale was only left with the option of reupholstering his seats, but when he heard Shaughnessy had a set of “pretty good” seats out of a defunct 330, Yale had them shipped to the East Coast. 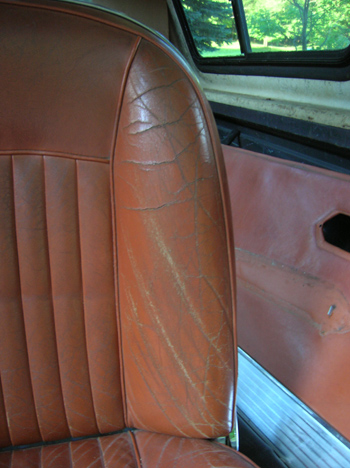 The definition of ‘pretty good” leaves a lot room for interpretation. The seats certainly have patina, but we saw what a few years of regular use can do for patina on Yale’s current set of seats. I thought these seats looked pretty good,… for 40 year old seats! The driver’s seat, as usual, is in worse condition, but we may be able to mix and match Yale’s old interior with some of this interior and make one decent set of seats and interior pieces. We’ll see.