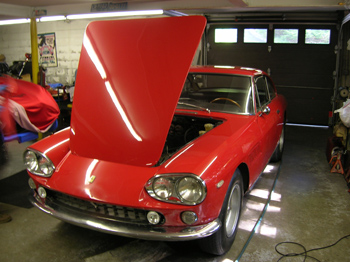 A new customer brought a four headlight 330 GT 2+2 to François’ to look at. The engine had no compression in one cylinder, and he was afraid of a serious problem. 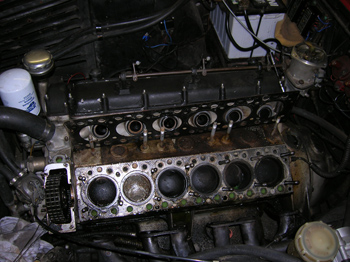 After confirming a bad cylinder, the only choice was to pull the head to have a look. 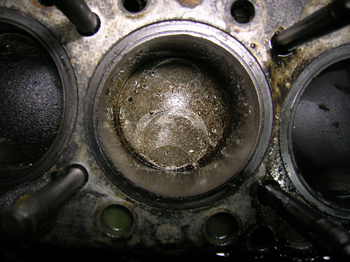 The top of the number 11 piston had the distinctive mark of a dropped valve seat. As the exhaust valve seat fell into the combustion chamber, the piston beat it into small pieces and ejected what was left out the exhaust. 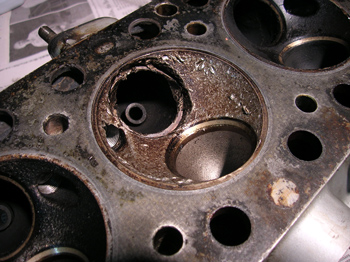 After I removed all the valves from the head, I was able to inspect all the carnage the valve seat inflicted on the head before it left the cylinder. 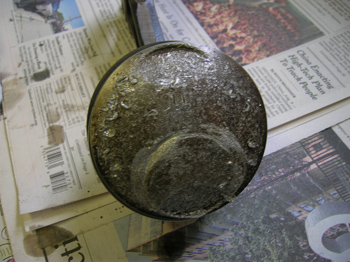 François was not at the shop today as I set to the task of removing the offending pieces, so I’ll have to wait until next time to discuss what happened, but it was pretty obvious some serious repair was in order. 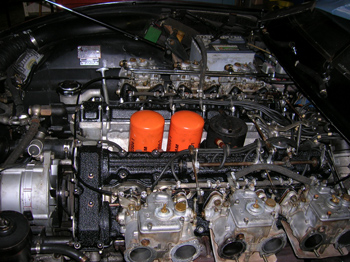 Just as another engine failure comes into the shop, another is about to leave. The 365GTC/4 I was working on is looking much better with all the major components installed. Alvin, François’ helper, did an excellent job restoring the valve covers, as the black wrinkle paint looks great. The only thing left on this engine is to install new float needles on all six carburetors so there will not be another hydrolocking event in this engine’s future.

I getting pretty psyched about this Year’s Tomyang.net Fall Party. Everyone is invited, but I would really like to see as many Vintage cars at this party as we can. I don’t want to see our old Ferraris fade into history as everyone locks them up in their garages. Bill Pollard and I are working hard to put on a fun party with plenty of cars to see. There are a couple 275GTBs,   Boxers, and even a V-8 car or two thrown in for variety that will be at the shop. My 330 America will be there, along with several confirmed Ferraris planning the drive to Gaylordsville, CT. The lifts will be working all day to get as many cars in the air so we can see that there is beauty well beyond the shiny side on these old Ferraris. Peter Sweeney (Forza Motors) will probably bring a car, so it’ll probably be up for sale! This will not be a get together to miss.