It’s been a busy couple of weeks with work, and family. I missed a few days of work last week, but that does not mean there was a lack of excitement. Here’s what’s been going on at my two jobs. 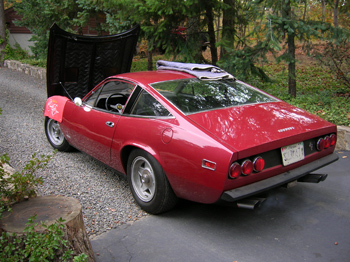 The 365GTC/4 that arrived at François’ shop several months ago has finally moved under her own power! This car came into François’ shop in April for a new clutch, but revealed a much larger problem. We found a bent rod from the owner starting the engine with a flooded cylinder. You can read more about our discovery here. 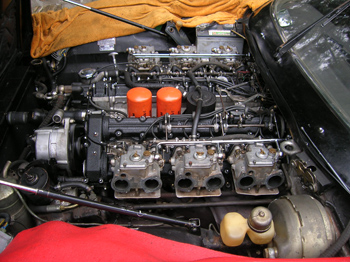 We decided not to remove the engine to repair the damage by replacing only the offending piston and bent rod, but this was only the start of our problem. After waiting several weeks to find a replacement rod and piston, reassembly of the head began with a new head gasket. Having recently had a particular head gasket fail on François, he decided to try another supplier of head gaskets made by a supposed O.E.M. (Original Equipment Manufacturer). The new Italian made head gasket was installed, and the rest of the engine was bolted back together. As I poured antifreeze into the radiator, I heard a strange noise. Looking under the car, I found a puddle of coolant forming under the head we just installed! Starting the engine only made things worse, as the green puddle started flowing like a river. François and I looked at each other and quit for the day. We both new we had no choice but to pull the head off this engine again!

The next time I went to François’ shop, he had already tried a second, different, gasket, and it too failed when he pressurized the cylinder. The leaks were not as bad, but still unacceptable. A third gasket was installed and we found it held up to pressurized air. The next step was to reinstall all the parts to the engine to start her up. Even with all the practice I’ve had with this GTC/4, it didn’t get any easier to put her back together. The distributors, and throttle linkages were not amusing to reinstall, especially when they’re all tucked so far under the windshield. As I started to complain about the limited access to distributors, François assured me we were lucky to be working on a U.S spec car. Evidently, with the European cars, they had one large 12 plug distributor with even less access!

We were both overjoyed to see no leaks under the C/4 when she fired up. Third time must have been the charm, but this car fought us all the way. It turns out the gasket that finally worked on this car was made in Australia, and sold by GT Parts in Arizona. Other suppliers have them too, but you have to know what you’re looking for. Many modern Ferrari head gaskets have a silicone bead running on the outer edge of the head gasket, but evidently, the Australian gaskets have individual rings of silicone around all the water passages. When I’ve collated all the data, I hope to put together a “how to” on head gaskets! 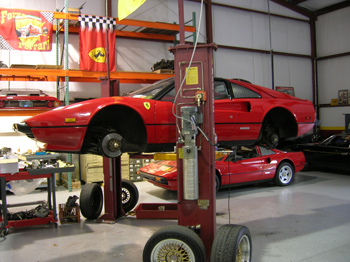 At Bill Pollard’s shop, I’m continuing my education with 308s, and there is definitely an abundance of them! The Quattrovalve I was working on with the major service is waiting for some parts. Some incorrect seals were sent by the supplier, so progress on that car was brought to a halt until the UPS guy comes with correct parts. A second QV was put on my lift so I could start on a rear brake overhaul. After the calipers were removed, Sean and I spent over an hour trying to get the rear rotors off. Rust and dirt tends to seize the rotors to the hubs, and it often takes a combination of cleaning, penetrating oil, hammering, prying, and harsh language to get these off. With the two of us taking turns there was no chance these rotors were going to win. 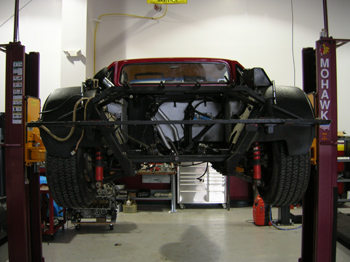 Sean, was working on rebuilding the engine on this 512BB, so I was put to the task of cleaning the engine compartment. As I was scrubbing and degreasing the rear of the car, I marveled at how much space the boxer engine took up up back there. With the rear bodywork off of the car, the boxer reminds me of a space capsule missing it’s rocket boosters.