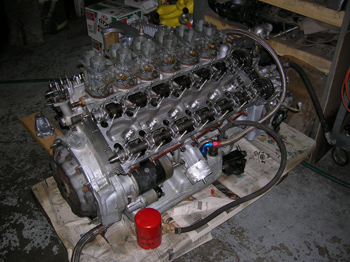 After finding faulty gaskets on a 365GTC/4 engine, François had no choice but to replace the same gaskets he recently installed on a 365GTB/4 engine. Luckily, this engine had yet to be installed in the Daytona, so removing the head was a little easier. After François described the sequence of fasteners and parts that needed to be removed, I got to work on the engine. 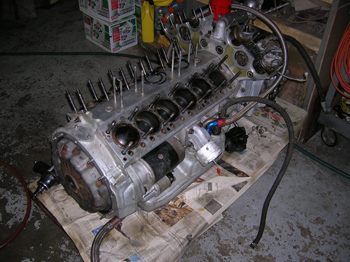 Soon both heads were removed, and I began cleaning the parts for their reassembly. It was interesting to see the differences between this 365GTB/4 engine and the 365GTC/4 engine I recently worked on. It can get a little confusing with the Ferrari numbering system, but the the Daytona, with the “B” for Berlinetta in its model number, has a row of 6 down draft carburetors, while the 365GTC/4 (anybody want to tell me what the “C” stands for?) has the 6 side draft DCOE Webers. The differences do not end there because the Daytona has chains and gears driving the camshafts while the C/4 uses one long chain. Each engine has different architecture to achieve its particular layout and it was neat to study the differences upfront and personal, instead of looking at a parts book. 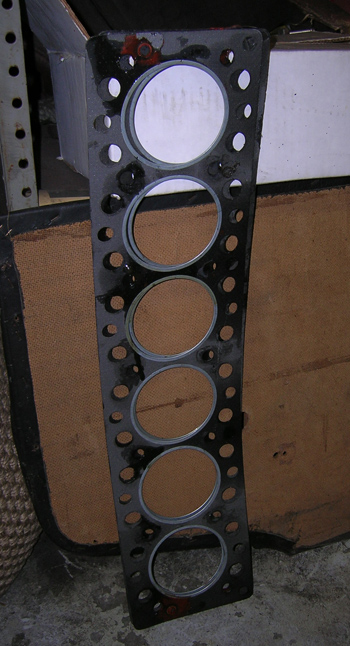 Here’s a picture of the head gaskets the did NOT work. They looked just like the ones that Ferrari originally used on their engines, only these didn’t work at all. They’re Italian made, and if you ever are sold a set, send them back! 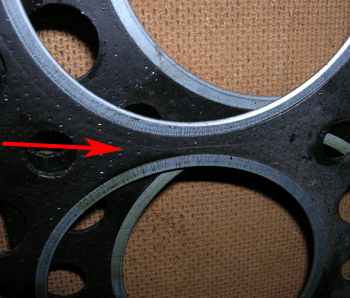 Ferrari cylinders protrude slightly above the deck of the block by a thousandth or two of an inch. This protrusion crushes the fire ring on the head gasket, and squishes the rest of the fiber material of the gasket. This gasket showed very little crush of the fire ring, and only a slight mark (arrow) on the fiber material of the gasket providing no sealing of the water passages. Some shops spray these gaskets with Permatex Copper gasket spray, but the leaks associated with the first set of failed so badly, no amount of spray would have helped. If you work at a shop, and have had similar failures, please contact me as I would love to get to the bottom of this problem. It’s really a waste of time and money for all of us if bad gaskets are sold to any unsuspecting engine builder! 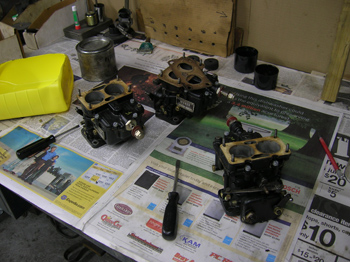 Since the new head gaskets were still in the mail, I began another project. A set of carburetors from a PF coupe needed to be rebuilt for an up coming engine rebuild. 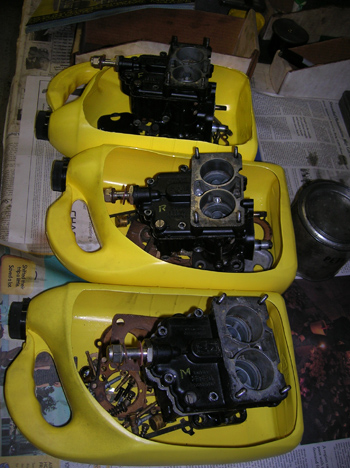 After an hour, all the parts were removed from all the three carbs and sorted. Some parts will be sent out for plating, while others will be cleaned and refurbished. 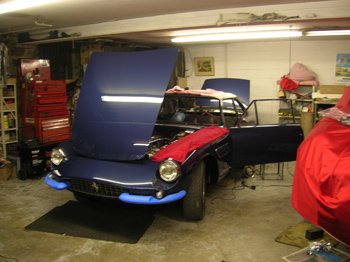 The 500 Superfast is back from the paint shop for the second time! A problem arose the first time around with the paint when an impurity started to bubble up from under the base coat. This happened after François began reassembling the car, so everything had to be removed again, and the car sent back to the painter. Upon closer inspection, and interrogation, the paint shop discovered one of the guys block sanding the car was placing his ungloved hand on the primed surfaces while working. The oils from his hand contaminated the primer, and eventually worked it’s way to the surface of the paint. The only choice was to strip the car to bare metal and paint the car again. Finally after months of waiting, the car is back, and hopefully, this time the paint will stick!

We seemed to have a run of bad luck at François’ and it has given me great insight on how easy it is to lose money repairing these old Ferraris. Although our vendors try their best to make good on failed parts, the time lost re-doing work is gone. The customer is often not aware of these issues and does not want to hear about the delays, forget about paying for lost time. So the next time you call your shop, and they tell you there is a delay, give them a little slack!

It’s about two weeks to the Fall Tomyang.net East Coast Party. Bill Pollard’s shop is getting ready to receive guests, and the some of the food has been sorted. There isn’t anything we’ll really need, but I’ve decided to ask if you’re coming to bring some kind of snack or dessert. The food will be a Pulled Pork Sandwiches and Cole Slaw from a local BBQ joint, so buy accordingly. Now all we have to hope for is good weather!