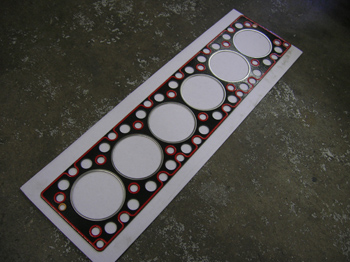 Before installing the head gasket on the Daytona engine François and I were working on, I took some pictures of the new Australian Head Gasket that seems to be working better than the ones we’ve been using. 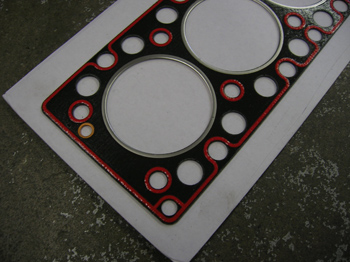 These gaskets have a silicone bead impregnated in the head gasket, but differ slightly from a similar gasket that failed on us. The silicone bead wraps around more of the water passages that the other gasket, and also completely seals the head studs, preventing oil from leaking past the studs.

I’m working on an article that describes some of the detail differences between head gaskets, and it can be found here.

I learned that I’ve actually met the person who supplies these gaskets while I was traveling in Australia a couple of years ago but I’m still trying to confirm the details. Small world! 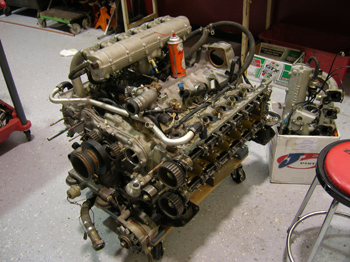 At Bill Pollard’s shop, I was put to work on a 512BBi engine. It’s the engine out of the Boxer I was cleaning last week. The car sat idle for many years, and we’re resurrecting it from her deep sleep. One cylinder seemed to have low compression, so pulling the head was the only option to see what was going on. Being an injected car, all the injector plumbing had to be removed, along with the intake plenum. I was expecting a couple of hours of soaking and gentle persuasion to get the manifold off, but was pleasantly surprised at how agreeable it was in leaving its home. 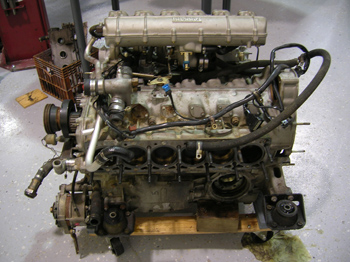 After some more cleaning of mouse poop and leaves from the top of the engine (flat Boxer engines make for great mouse nests!), I removed the cams, and started the next battle to get the head off the car. Sean and I were again surprised to find the head moving off the head studs with ease. Enzo must have been shining down on us that day!

We found one leaking exhaust valve, which may have been from carbon being caught on the seat, and forcing the valve to stay slightly open. We’ll probably strip this head to clean some of the gum and varnish that built up over the years of sitting idle, but so far, no major catastrophes.